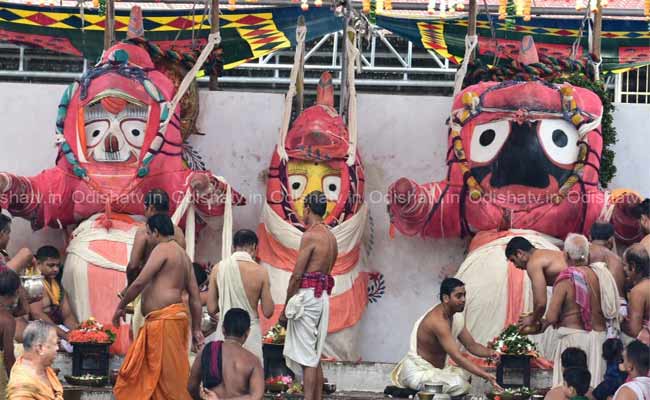 Puri: In view of the spurt in COVID-19 cases and lockdown curbs, Puri district administration on Saturday decided to conduct Covid testing of Garabadu servitors who will be engaged in conduct of the Snana Purima rituals, a key festival in the run- up to Rath Yatra.

Though the services of 108 Garabadu will required for the conduct of the Debasnana Purnima, the authorities have decided to conduct COVID19 tests of around 172 servitors. The servitors will undergo COVID test on May 29 and 30 while the reports are expected to be received by June 3. The Snana Purnima or the bathing ritual of the Holy Trinity of Puri Jagannath Temple is scheduled to be held on June 5.

“We have a total of 172 members and all of them will undergo COVID testing,” said Rajat Kumar Pratihari, Secretary of Garabadu Nijog.

Apart from Garabadu servitors, 150 servitors of Daitapati Nijogs also participate in the Debasnana Purnima rituals. Though the administration had conducted a workshop to create awareness among the daitapati servitors on COVID-19 recently, no decision on their COVID testing has been taken.

“We are ready to abide by all the rules and regulations and conduct the rituals,” said Ravindar Das Mohapatra, president of Daitapati Nijog.

As per tradition, servitors of 10 Nijogs including Garabadu, Daitapati, Suara, Mahasuara, Suarabadu and others are involved in the rituals. However, concerns were raised whether COVID testing will be conducted only for Garabadu servitors or extended to other Nijogs as well.

Clearing the air, Ajay Kumar Jena, Development Administrator of Sri Jagannath Temple Administration (SJTA) informed that a list has been sought from all Nijogs by May 25 and the servitors who will be engaged during the Snana Purnima rituals will have to undergo COVID testing.