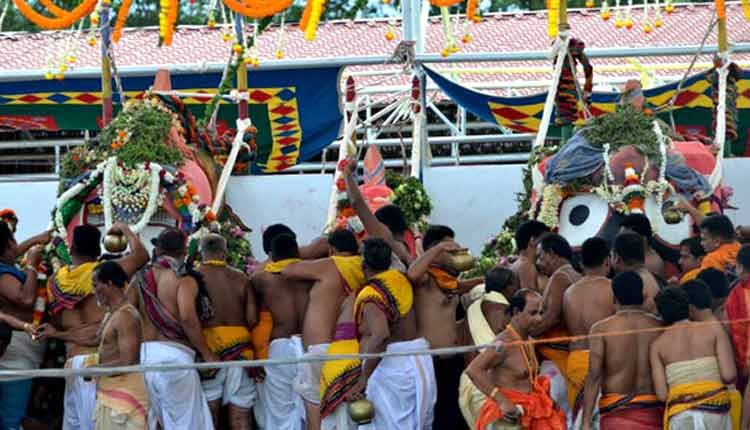 Puri: In order to prevent movement of public during Snana Yatra, section 144 will be imposed in the pilgrimage city from June 4 till June 6.

Puri collector Balwant Singh today informed that the restriction will be clamped from June 4 (10 pm) to the morning of June 6 to contain the spread of COVID-19 during the rituals.

“Restrictions will be imposed in a minimum area so that people will not have to face any problem. The restrictions may continue till 2 am of June 6,” said Singh.

As Puri also comes under the districts where shut down will be enforced on Saturdays and Sundays, a unanimous decision was taken to conduct the rituals of the Lord Jagannath abiding by the norms, said Chief Administrator of Shree Jagannath Temple Administration (SJTA) Krishan Kumar.

Meanwhile, the installation of ‘Chari Nahaka’ on all three chariots of Lord Jagannath & his siblings completed ahead of schedule. As per the tradition, the structures get their shape on Snana Purnima, but this year despite Covid-19 crisis, the work was completed on a war footing.

A team of the Archaeological Survey of India (ASI) had earlier visited Puri Srimandir and inspected the Snana Mandap (bathing altar) of the Trinity and also the Nata Mandap and Jagamohan of the Lord Jagannath Temple.

Following the inspection, Arun Kumar Mallick (Odisha circle) superintendent of ASI, said “We assessed the progress of the work in Nata Mandap. Around 60 stones which were damaged on the floor of Snana Bedi have been replaced. Though there are few other works in some parts of the temple they will be completed in due time, said Mallick after inspecting the repair work at the 12th-century shrine.”

Earlier, Puri Gajapati Dibyasingha Deb had said that Deba Snana Purnima will be conducted as per the rituals inside the temple premises at the Meghanad Pacheri with a limited number of servitors, while the temple will be completely out of bound for the devotees.