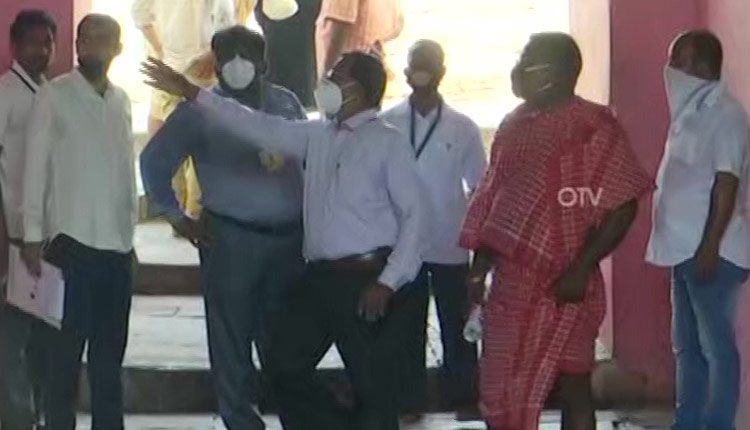 Puri: Ahead of the Snana Yatra rituals of Lord Jagannath and his siblings, a team of Archaeological Survey of India (ASI) led by (Odisha circle) superintendent Arun Kumar Mallick visited Puri Srimandir and inspected the Snana Mandap (bathing altar) of the deities.

Mallick accompanied by other official of the ASI examined the condition of the stones that were replaced on the Snana Mandap recently. The team also inspected the Nata Mandap and Jagamohan of the Lord Jagannath Temple.

This is a routine work taken up the ASI ahead of Snana Yatra and Rath Yatra, said reports.

“We assessed the progress of the work in Nata Mandap. Around 60 stones which were damaged on the floor of Snana Bedi have been replaced. Though there are few other works in some parts of the temple they will be completed in due time, said Mallick after inspecting the repair work at the 12th-century shrine.

The ASI official further said that the other routine repair works which are done as annual maintenance of the temple will be carried out as usual during the celebration of Rath Yatra.

Worth mentioning, ASI usually takes up the scheduled check-up of Srimandir while the presiding deities are in their annual nine-day sojourn to Gundicha Temple during the Car Festival.

On Saturday, Puri Gajapati Dibyasingha Deb following a meeting of the Sri Jagannath Temple Managing Committee informed the annual Rath Yatra will be definitely held as per tradition despite Covid crisis, but without any congregation of devotees. Besides, public gathering will be banned in the vicinity of Srimandir on Snana Purnima. The entry and exit points of Puri and Badadanda will also be sealed to prevent entry of any devotees in the pilgrim town during the period.

In a related development, the East Coast Railway has also terminated Puri-bound trains at Bhubaneswar Railway Station on the advice of the State government. The Railway said that trains have been stopped to Puri till any further notice by the government.

Also Read: Snana Yatra, Rath Yatra To Be Held Without Devotees This Year!