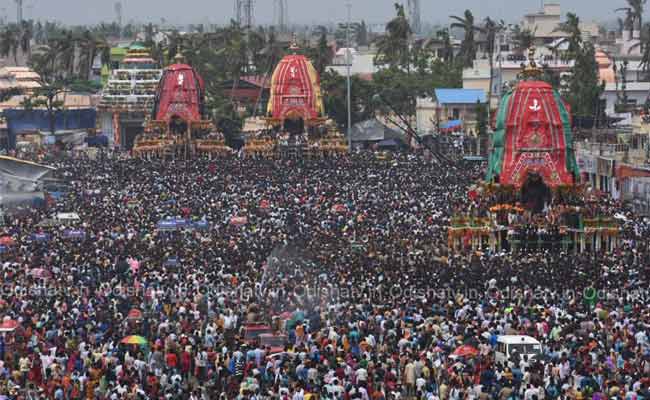 Puri: Time is running out. Something which never has happened in hundreds of years, unfortunately seems likely in 2020 as dark clouds of uncertainty continue to hover over the annual grand spectacle of Holy Trinity. Today after the State government sought the permission of the Centre to commence construction work of the chariots during the ongoing lockdown, Chief Carpenter of Nandighosa expressed that he has lost all hopes of Rath Yatra this year citing that the time left for completing chariot construction is INSUFFICIENT.

While Akshaya Tritiya and Chandan Jatra rituals, marking the beginning of preparations for the festival, were held inside the premises of the 12th-century shrine on April 26, Rath construction is yet to start.

“Chariot construction always begins on the day of Akshaya Tritiya but due to lockdown, we have already lost 11 days of work just waiting for government’s approval. As per the traditions, today is Nrusingha Chaturdashi and we should have completed the ‘Kona Bhuja’ work of the chariots by now and prepared well for ‘Chaka Dera Anukula’. We have lost all hopes. Mahaprabhu’s Rath Yatra seems unlikely this year,” said Bijay Mohapatra, Chief Carpenter (Mukhya Moharana) of the chariot of Lord Jagannath, while speaking to OTV.

We have lost all hopes of #RathYatra this year. Rath construction begins on Akshay Tritiya but due to lockdown, 11 days of work have been wasted. We should’ve completed ‘Kona Bhuja’ work by now & prepared well for ‘Chaka Dera’ -Chief Carpenter, Nandighosa chariot, Bijay Mohapatra pic.twitter.com/7v6Vuy0xlG

Earlier, the Srimandir Temple Management Committee unanimously decided to go for chariot construction and then sought State government’s permission for commencement of construction works. However, senior servitor of Puri Srimandir, Binayak Das Mohapatra was annoyed today after Odisha government threw the ball into Centre’s court when there is already so much of delay.

“By putting the onus on the Centre, the State government seems to be intentionally playing a drama to stop the festival. If at all the government wanted so, it should have made it clear before the initiation of Chandan Jatra. If Rath Yatra is not held this year, those playing the role of villain in this will be exposed,” the senior servitor said venting out his anger.

#Odisha govt seems to be playing a drama to stop #RathYatra by seeking Centre’s permission. If the govt wanted so, it should have made it clear before commencement of Chandan Jatra. Those playing the role of villain in this will be exposed: Senior servitor Binayak Das Mohapatra pic.twitter.com/dQQci2mbp9

Politics Heats Up Over Delay

Odisha PCC Chief Niranjan Patnaik has called for not politicising the issue and asked the government to discuss and find a way to compensate for the delay. On the other hand, senior Congress MLA Tara Prasad Bahinipati alleged that it’s a ploy of State and Central Government to create a hindrance in the ritualistic events of Rath Yatra.

However, senior BJP leader Bijoy Mohapatra refuted the allegations clarifying that there is no role of Centre in this.