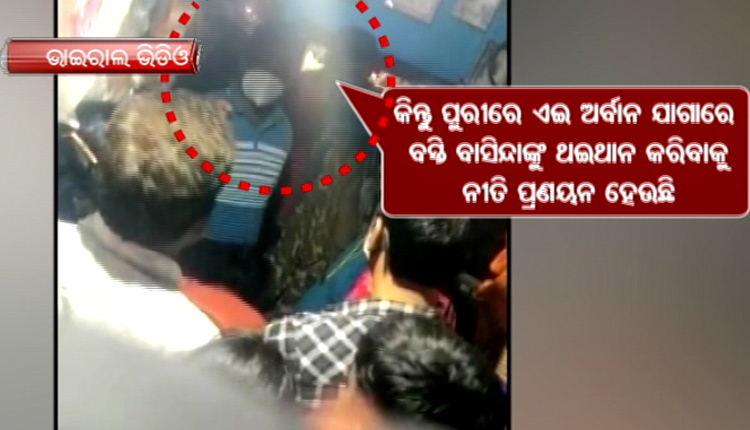 Puri: A man claiming to be an Assistant Commandant (Homeguard) met the family members of K Ramesh, who allegedly died in the police custody on November 18, late on Saturday night.

In a video, which has gone viral, the ‘official’ is seen making claims of financial assistance and other aids under various government schemes to the deceased’ family members. The video went viral on social media platforms on Sunday.

The self-styled Homeguard Assistant Commandant who was accompanied by a local had called on Ramesh’s family on Saturday night. In the video he could be seen immersed in a serious discussion with Ramesh’s family members, offering them land in the town areas of Puri.

“The law will take its own course and the persons responsible for Ramesh’s death will be punished. The slum dwellers in Puri will be provided land in urban areas soon. Though I do not have the authority to give you the assurance in writing, we will definitely grant a land to you at that time,” the homeguard ‘official’ was seen saying in the viral video.

“You all decide how much compensation you want? Whatever help you want, we will try to provide,” he was seen assuring the family members of Ramesh.

Meanwhile, questions are being raised over the very purpose of the home guard official’s to visit Ramesh’s house late in the night and the overtures and promises made by him to deceased family. This comes in the backdrop of claims earlier made by the deceased’s uncle that the police had tried to induce him with offer of land allotment if he kept silence over his nephew’s death.

In another video that went viral yesterday, a woman claiming to be the mother of deceased K Ramesh, alleged harassment by political leaders and media persons. The woman, who was sitting beside a man believed to be Ramesh’s father, said that she is now staying at her relative’s house and urged the media persons and political leaders not to harass them.

On the other hand, countering the allegations leveled on the Puri Police by the family members that they were not allowed to see the deadbody of Ramesh after post-mortem or conduct the last rites, the office of the Puri SP, posted a video footage on its Twitter handle on Saturday stating that the body of Ramesh was cremated in the presence of his family members, including his father K Gurumurthy and uncle K Ariya at Swargadwar after post mortem at the district headquarters hospital (DHH).