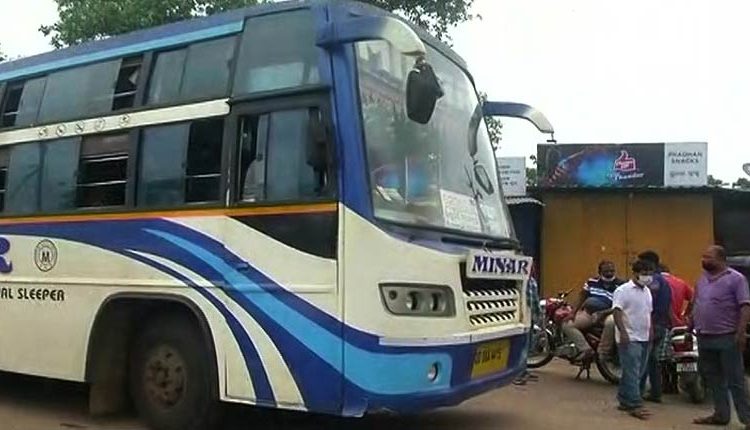 Bhubaneswar/Cuttack: Private buses services finally resumed their operation in Odisha on Thursday almost over two months after going off roads following enforcement of nationwide Covid-19 lockdown. However, as expected, only a handful number of buses have begun plying on the roads due to low passenger footfall and other reasons.

While a few buses started operation from Bermunda Bus Stand in Bhubaneswar to several parts of the State early morning, some passengers who reportedly reached Badambadi Bus Stand in Cuttack to travel to Rourkela and Sambalpur were left stranded due to unavailability of buses.

Similarly, private buses could not ply from Jepore bus stand in Koraput district and Balasore bus stand too due to unavailability of drivers, helpers & other staff and shabby condition of the buses due to over two months of standing idle, added reports.

A private bus carrying 15 passengers which left from Baramunda Bus Stand to Boudh was the first bus to ply in the State. Another two buses from Bhubaneswar bus stand to Berhampur and Balugaon have also left for their respective destinations.

As per the Standard Operating Procedure (SOP) laid down by the government to prevent novel-Coronavirus infection, buses were sanitised while staff were seen ensuring that people wear masks and clean their hands with sanitizers before boarding the vehicles.

Showing concerns over the prevailing situation, a bus owner at Badambadi stand said “There are no passengers. How will we start operation? Besides, we don’t have drivers and other staff.”

Asked about the reason behind the partial resumption of buses, State Transport Minister Padmanabha Behera said, “As buses remained off roads for more than two months due to the nation-wide Covid-19 lockdown, the bus staff might have went on leave and the vehicles must have also developed mechanical problems.”

“Besides, passenger footfall is also quite low and I hope the services will gradually normalise in Odisha by June 1st,” added the Transport Minister.

Though the State Government had granted permission for the resumption of private bus service within Odisha from May 25, it could not be resumed due to deadlock between the All Odisha Private Bus Owners’ Association and the government over a series of demands including financial assistance, exemption of due taxes on bus owners and insurance cover for bus staff.

However, after discussion with the state government yesterday, the private bus operators agreed to run buses from today.