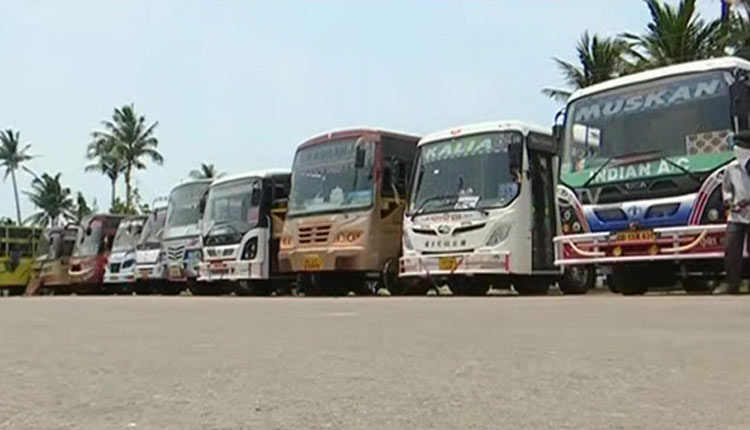 Bhubaneswar: Just a few weeks after resuming bus services nearly two-months following enforcement of lockdown across the country in the wake of Covid pandemic, private bus operators in Odisha are reportedly planning to discontinue the operation over losses they are incurring due to low footfall of passengers.

The buses which remained off roads following enforcement of lockdown resumed services on May 28 after easing of restrictions by the government. However, the resumption of the services too soon has compounded their problems instead of resolving it, said bus owners.

The operators said the buses running in long routes are getting low number of passengers as people are hesitant to use public transport due to Covid fear. As a result, the buses operators are failing to meet the fuel and salary expenses of the staff let alone profits, they said.

The operators said they are suffering losses between Rs 12,000 and Rs 15,000 per day. The buses running during nights are worst-affected, they said.

Umesh Pradhan, owner of Sarala Bus travels said, “I have about 50 buses on different routes. In case of superfast buses, our expenses are between Rs 15,000 and Rs 17,000, but the earning is too less. We are unable to pay the salaries of the regular staff. If the situation continues, the private bus services will completely stop in the next eight to 10 days.”

Prasant Pradhan, owner of Nilakantheswar Bus said, “We suffered losses due to suspension of services for three months and now we are spending from our pockets to continue the bus services. We will be forced to stop the services if the situation continues for two weeks.”

According to sources, about 14,000 private buses were in operation in inter-state and intra-state before enforcement of lockdown. However, only 450 to 500 buses are running across the State now. About 150 buses were running to others cities from Baramunda bus terminal alone, but the number has reduced to 15 now.

On a possible solution into the issue, bus owners have said that waiving of road tax of buses when they were off roads would not benefit them rather if the State government exempted tax for coming period, the bus owners might get some profits.

Debasish Nayak, spokesperson of All Odisha Bus Owners’ Association said, “As we have resumed the services, we have to pay salaries to the staff. But in situation where we are spending about Rs 14,000 on long routes but getting Rs 2000 to Rs 3000 as fares in return, how will we sustain. The government should take due note of the situation and take necessary steps.”

“We will urge the State government to create awareness among people that travelling in buses in safe,” he added.