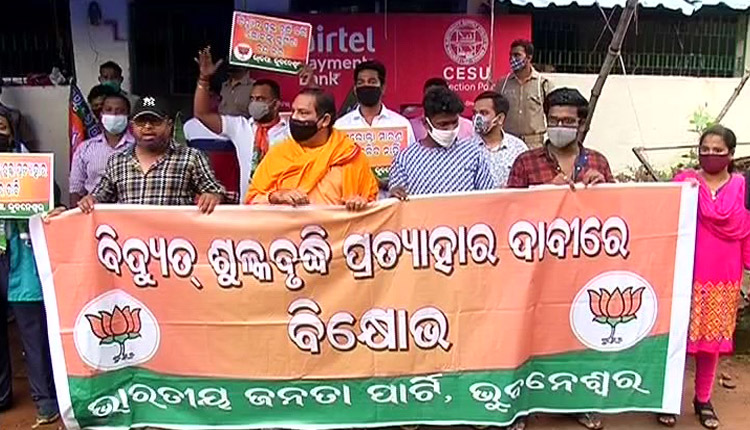 Bhubaneswar: The Opposition Bharatiya Janata Party (BJP) intensified protests against the decision of Odisha Electricity Regulatory Commission (OERC) in connection with power tariff hike from October, and has demanded immediate rollback of the move.

Members of the Bhubaneswar district BJP led by district president Babu Singh, Jagannath Pradhan, and others were seen picketing outside all the 8 electrical sub-division offices in the city. “At a time when the Covid pandemic has affected the lives and livelihood of many, the government did not even think twice before burdening the public with higher power tariffs. The decision should be revoked or else massive protests will be launched across the State,” threatened the party workers.

The agitators were, however, taken by police into preventive custody.

Meanwhile in Assembly during a discussion on the adjournment notice with regard to power tariff hike, Odisha Energy Minister Dibya Shankar Mishra said the power tariff was increased by only four percent after seven years. “There’s a hike of only 20 paise per unit. Furthermore, farmers and BPL families have been excluded from this. Except for one or two States, power tariff in all States is higher in comparison to Odisha,” Mishra said.

Terming the government’s decision as unfortunate and unethical, Opposition chief whip Mohan Majhi said power tariff hike during a pandemic is like rubbing salt in the wound. “The statement of concerned minister goes against the common and poor people. They are already deep in a crisis and this hike will make the situation worse for them given the fact that most of the family members are now staying at home.”

Majhi also questioned the government’s incapability to collect dues of Rs 6000 crore from the power distribution companies and other big companies.

It is pertinent to mention that OERC had recently approved a proposal to hike power tariff by 20 paise per unit of electricity consumed in the state from October 1. The revised rates will not be applicable for Kutir Jyoti consumers and also the farmers who are living below the poverty line (BPL).