Bhubaneswar: The vulnerable condition of farmers and tribals, who dominate Odisha’s socio-economic demography, has made the State emerge as the third most vulnerable in the country to climate change. Even…

Bhubaneswar: The vulnerable condition of farmers and tribals, who dominate Odisha’s socio-economic demography, has made the State emerge as the third most vulnerable in the country to climate change.

Even as only 7 from State figured in the country’s top 100 most vulnerable districts, the report ‘Climate Vulnerability Assessment for Adaptation Planning in India Using a Common Framework’ has shed light on the State’s raw nerves.

Despite farmers and tribals having been the vote bank of all major political parties, the first of its kind of vulnerability report shows how they are the deprived lot in the State, which make them prone to climate change risks,

Though the report prepared by the Department of Science and Technology, Government of India, has taken a set of 14-indicators to make vulnerability assessment from state to the sub-state level, the major drivers behind Odisha’s poor were:

As per the report, when such farmers in as many as 13 districts in Odisha depend on monsoons to grow their crops (rainfed farming) and also don’t have crop insurance to cover themselves from weather shocks, in the vulnerability index Odisha could score only 0.633. 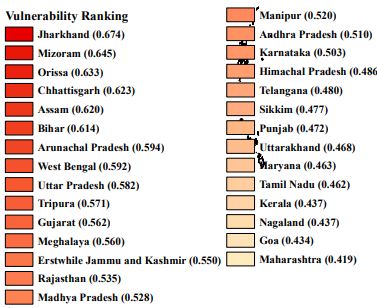 With the governments over the years developing a penchant for brownfield projects than nourishing the green lungs (forests) of the State, the poor proportion of forest area per 100 rural population has proved a double whammy for Odisha in the vulnerability index.

“Since most rural (tribal) populace depend on forest produces as their source of sustenance, the low forest area has made them vulnerable to perils of climate change,” the report observed.

When the incidence of vector-borne disease in Odisha is high, the sorry state of health infrastructure in nearly 93 per cent of the districts (28 out of 30) bracketed the State among the most vulnerable in the country. 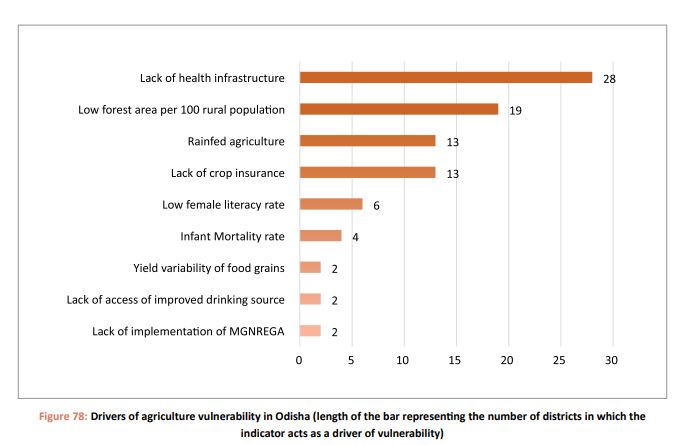 The top-5 vulnerable districts in the State are Malkangiri, Nayagarh, Gajapati, Kalahandi (the rice bowl of the State now), Kandhamal, Rayagada and Koraput. 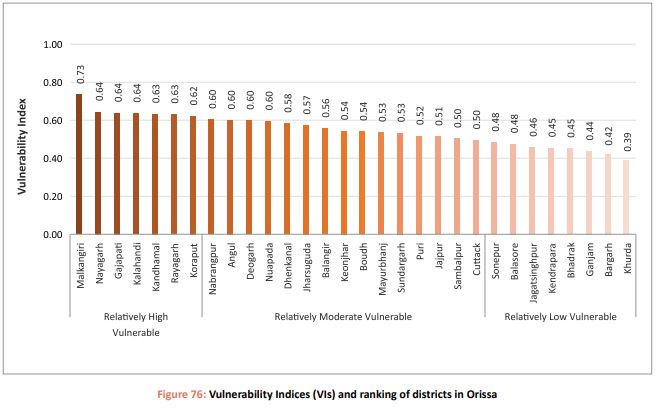 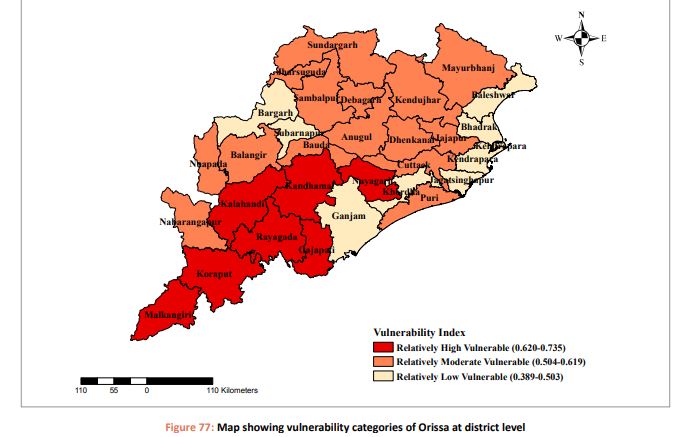 An analysis of the district reveals that while farmers dominate in the district of Kalahandi, though the tribal population is estimated at over 28 per cent, except Nayagarh, the other most vulnerable districts are tribal-dominated where their population hover between 60 per cent (Malkangiri) to over 50 per cent in other districts.

Nuapada district, which is hogging the headlines by virtue of emerging as a Covid-19 hotspot in the country, has been ranked as the 14th most vulnerable to climate change because the district has basically a forest-based economy.

When the economy of people there depended on commercial forest trees to minor produces like mohua flowers, kendu leaf etc, the poor forest area per 100 rural people has made the inhabitants highly prone to climate risks. The forests there have given way to large-scale mining, which hardly benefitted the dwellers in the district.