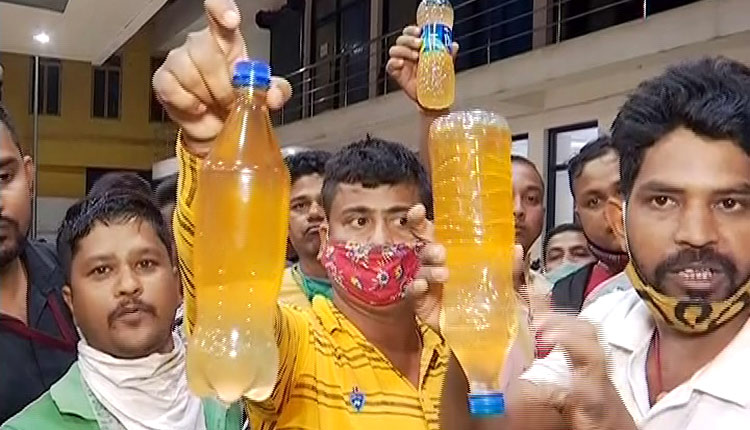 Bhubaneswar: At a time when skyrocketing fuel prices are pinching the pockets of customers, alleged adulteration of petrol triggered tension at a filling station in Bhubaneswar on Wednesday.

Several customers gathered at the petrol pump ‘Highway Service Centre’ located in Baramunda area and alleged that the petrol dispensed from the machine contained water. The protestors extracted petrol from the fuel tanks of their bikes in plastic bottles to prove their clams.

“I fill petrol from this pump everyday. Shockingly, today I witnessed that almost 50 per cent the fuel dispensed at the station contains water. The mileage of my bike steadily decreased due to presence of adulterated fuel.  After running for a few kilometres, it suddenly stopped,” said Gobinda Chandra Saran, who works as delivery agent of an e-retailer.

Another customer said, “I filled the fuel tank of my motorcycle from this filling station. I just dropped my children at a private tuition in Khandagiri and hardly covered a distance of 2 km when the engine stopped. It did not start again and I was forced to push the bike to the petrol pump. Now the fuel tank is full of water.”

Comments from the fuel station owner or concerned authorities could not be obtained in connection with the allegations levelled by the customers.