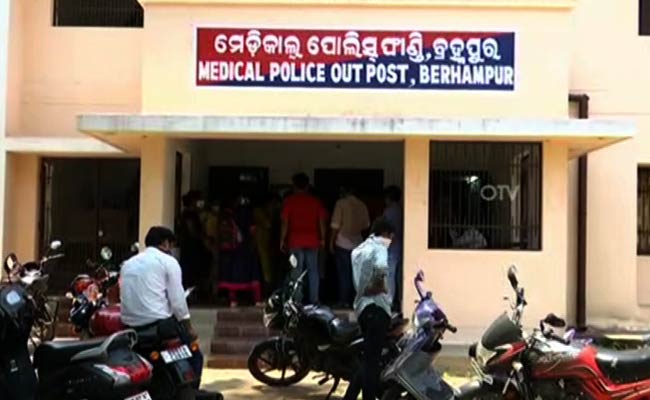 Berhampur: At a time when the entire medical fraternity is working 24/7 and providing emergency services to people during the COVID-19 pandemic, a patient’s attendant allegedly bit off a doctor’s ear in Odisha.

The incident has been reported from MKCG Medical College and Hospital in Berhampur.

As per reports, the accused Tarani Prasad Mohapatra reached the hospital after his wife developed labour pain today. However, he allegedly attacked some doctors and bit off the ear of Dr. Sakil Khan after being denied entry to the labour room.

“He (Tarani) reached the hospital along with the patient at around 9:30 am today. As other attendants had gathered near the gate of the labour room, I asked them not to congregate as stress is being given on social distancing to check the spread of COVID-19. As I had allowed one attendant to the labour room, the accused forcibly tried to enter and attacked me first,” said Dr Smruti Ranjan Pattnayak.

Smruti further alleged that the accused also attacked others and bit off Dr Sakil’s ear.

Palpable tension prevailed at MKCG following the incident for quite some time as doctors demanded stern action against the accused. A police complaint was lodged in connection with the incident.

“Doctors are working round-the-clock and we don’t know when people will understand that we are working for them,” said another doctor.

However, the accused Tarini Prasad Mohapatra, who has been detained by police, refuted the allegations.

“I had rushed my wife to the hospital after she complained of labour pain. As I had to give some essentials to her, I wanted to enter the labour room but was denied entry. The security guard and the doctor present at the spot misbehaved with me and even attacked my relatives,” said Mohapatra.

It is not for the first time that the doctors have been attacked by patient’s attendants in Odisha. A doctor was allegedly attacked by the husband of a pregnant woman at Titlagarh Sub-Divisional Hospital in Bolangir district in October last year.

Meanwhile, Berhampur police arrested the accused after registering a case under relevant Sections of IPC, OMSPMSI (Prevention of Violence & Damage of Property) Act 2008 and Epidemic Diseases Ordinance 2020. Besides, the police will submit a proposal to book accused under NSA.