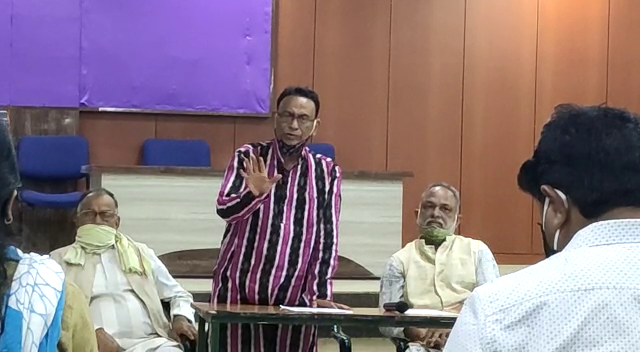 Sambalpur: The Paschim Odisha Krushak Sanghatahan, an outfit fighting for the rights of farmers in western Odisha, on Saturday warned the government of a massive protest from December 5 in protest against the current procedure of paddy procurement and the token system.

At a press meet, the outfit announced that the activists of the organisation will take to the streets and stage agitation from December 5 in protest against the current procedure of paddy procurement. The outfit opposed the policy of procuring 19 quintals of paddy from irrigated areas and 13 quintals from non-irrigated pockets.

Meanwhile, cotton farmers in Bolangir district alleged that millers are interfering in the Mandi affair. The farmers have to sell their produce at prices lower than the minimum support price (MSP) due to high handedness of the millers.

“While the government price stands at over Rs 5000, we have to resort to distress sale. We are selling our produces for Rs 4000 to the millers. Though the government has opened four mandis in the district, they are not cooperating with us,” said a farmer.

Another cotton grower said “we have to wait for 4-5 days at the mandi to sell the items. After failing to sell at mandi, we have forced to sell our produce to millers at cheap rates.

Ashok Kumar Mohanty, District Agriculture Officer, Bolangir said “The MSP for the cotton has been fixed at Rs 5825 this year. Four mandis are functioning in the district and they have been instructed to procure the same from farmers.”

Serum Institute To Seek Emergency Use Authorisation For Covishield Vaccine In 2 Weeks: Poonawalla