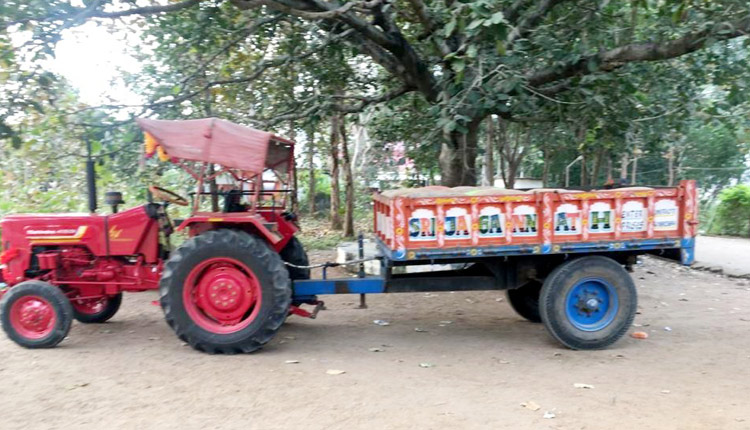 Nabarangpur/Raipur: A tractor transporting paddy from Nabarangpur district in Odisha to Chhattisgarh was seized by a team of police of the neighbouring state on Monday.

As per reports, the tractor carrying 25 packets of paddy from Malapada village in Koilimunda panchayat under Chandahandi block was en route to a mandi in Chhattisgarh when the police intercepted it near Amlipadar under Deobhog Tehsil of Chhattisgarh. Following the seizure of the paddy, the police handed over the tractor to the ADM of Deobhog.

Notably, as the paddy procurement season began in Chhattisgarh, the government has set up 12 check posts on several roads along the Odisha border to curb unauthorised sales of paddy procured from Odisha in the mandis of Chhattisgarh.

The decision was taken on last Thursday, when the District Collector and SP of Goriabandh in Chhattisgarh had visited Deobhog along the Odisha border and reviewed the security situation.

As per their order, at least 12 check posts were created at the border adjacent to Odisha, and the seizure of the tractor on Monday was the result of the strict vigilance at the check posts.

Nilesh Kumar Khirsagar, Collector of Gariabandh in Chhattisgarh said, “Nobody will be allowed to sell Odisha’s paddy in Chhattisgarh. We have made such check posts last year too which was instrumental in keeping the middlemen at bay.”

It is pertinent to mention here that, the price of paddy in Chhattisgarh is said to be Rs 2500 per quintal while in Odisha the price is Rs 1868 per quintal.

The difference of almost Rs 650 has made many unscrupulous businessmen and middlemen from both the states to procure paddy from Odisha and sell it in Chhattisgarh at a higher rate.

The business model is evidently not new to the border areas. As per a report published in News18, the Odisha government had earlier asked collectors of eight inter-state border districts to prevent entry of paddy from Chhattisgarh so that the MSP does not go to unauthorised persons. The eight districts whose collectors have been put on alert are Bargarh, Sambalpur, Bolangir, Kalahandi, Nuapada, Jharsuguda, Sundergarh and Nabarangpur.