Over-The-Counter Liquor Sale Begins In Bhubaneswar, But Where Is Govt Order? 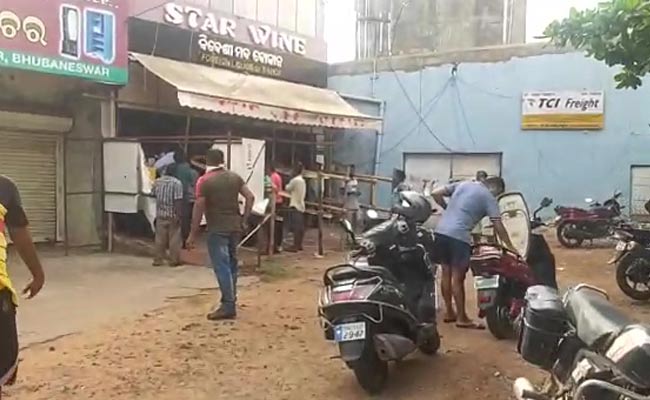 Bhubaneswar: Throwing an open challenge at the State government and the norms set by it, foreign liquor outlets in the capital city were seen selling liquor to customers at the counter on Monday. This is in violation of the Odisha government order dated May 23 which had permitted only home delivery of liquor by Swiggy and Zomato, while disallowing sale of liquor at counters.

As per reports, the gross violation of law by both dealers and booze lovers was seen at a counter in Bapuji Nagar at the heart of the city and another in Cuttack Road as well where tipplers had gathered to buy liquor which they cited as a treat that eluded them for almost two months due to the lockdown enforced in view of novel coronavirus (n-CoV) outbreak.

As per the Odisha government’s guideline, sale of foreign liquor in the State was allowed only through online mode. It had allowed home delivery of liquor from the existing ON and OFF shops of IMFL and Beer situated in areas other than containment zones and shopping malls by amending the relevant provisions under Excise Rules, 2017.

The notification by the State Excise Department had clearly stated that there will be no counter sale of liquor by excise licensees.

However, the law and its enforcement went up in smoke this morning as some India Made Foreign Liquor (IMFL) retail outlets began counter sale of liquor, when government is yet to grant permission regarding the same.

When asked, a dealer in Bhubaneswar said, “People don’t want liquor to be home delivered. They want to purchase from the counter itself and I am doing what the customers want me to do.”

This is what happens when we confuse people who’ve been waiting 2 months to have their share. Numerous notifications from govt on online, offline, Aadhar, home delivery have led to this “violation” – be it direct buying liquor, social distancing or wearing masks – in Bhubaneswar pic.twitter.com/fsDcnrnWtL

Speaking over the reported incidents, Excise Superintendent of Khurda, Prasanna Acharya said, “We haven’t allowed over-the-counter sales yet. All the liquor dealers were advised to make their sales through online mode only. The shops which are open will be forcefully shut down.”

It is pertinent to mention here that foreign liquor (FL) trader associations are demanding over-the-counter sale of alcohol apart from the online sale. They have requested the government to consider both online and offline sale of liquor as only online sale will not help the traders meet the target.

Also Read: Home Delivery Of Liquor In Cuttack From Tomorrow