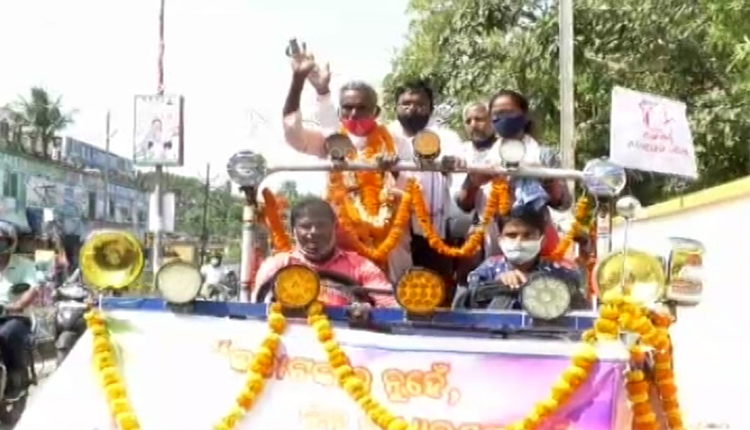 Balasore: Fighting the fear of the pandemic, political heavyweights of the BJD, BJP and Congress are reaching out to the people through door-to-door campaigns, virtual and public rallies and trying their best to woo the voters. Amid a fierce power battle, Benudhar Barik who has filed his nomination as an independent candidate for the by-election to Balasore Sadar Assembly constituency is confident that he is not far behind, for, his campaign race too is gaining momentum with each passing day.

The octogenarian hit the campaign trail first on foot, next he rode his broken bicycle; then a few Jatra artistes pitched in seeking vote for him so that he can fulfil his dreams of raising various public issues in the State Assembly after winning the elections.

Knowing that the journey won’t be easy for him to meet people in every household by foot/cycle, some youth organisations made sure that his financial constraints do not pose a hindrance in his election campaign. Benu Mausa- as he is fondly called- is now campaigning in an open jeep facilitated by his followers.

A barber by profession all through his life, Benudhar wants to be an MLA not for money or other comforts but to ensure that the voices of the common people reach the assembly. “The opponents have money and muscle power, but public support is with me. I will work for the interests of all the people, especially the slum-dwellers. People have encouraged me, and I am in no mood to look behind. Because I have the support, I agreed to fight the people’s fight in the assembly.”

Regardless of whatever the results would be, Benudhar’s passion at this age to lock horns with the heavyweights has garnered much respect and appreciation.