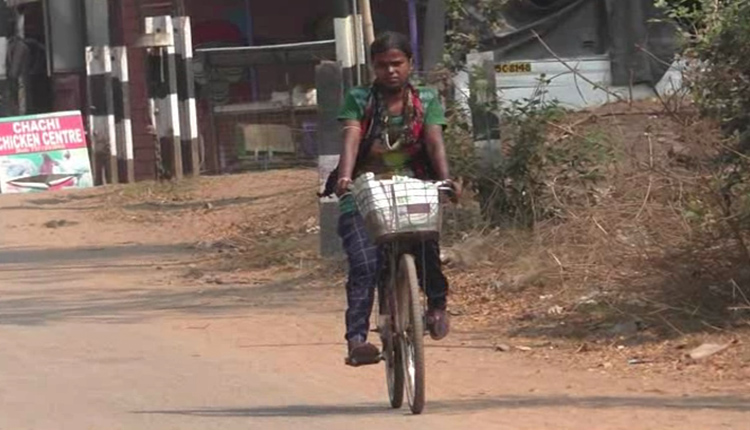 Cuttack: As March 8, 2021 dawned and women across the globe got ready with their mobile phones to send Women’s Day greetings to each other, Rina Bhuyan, comes out of her home with her bicycle and newspapers to distribute them among the readers.

Infected by Polio from birth, Rina’s limbs are twisted and she cannot work properly. However, a never say die attitude made her a role model for millions of other women who have left their fate on the hands of destiny.

“Do not be a burden on your parents and take up whatever work comes in your way to become self dependent, because no job is small,” says Rina who hails from Choudwar in Cuttack, marking the International Women’s Day on Monday.

Her daily chores begin even before the dawn. She reaches the paper point early morning and receives her consignment to distribute it among readers. Following separation from her husband, the bicycle became her only companion, which she rides almost 30 kms each day in the town and never misses a customer who eagerly await her arrival to get their daily dose of news. “Rina’s name has become synonymous with punctuality as she never lets the tea get cold before the news paper reaches,” says a customer.

Educated till matriculation, she was married off by her father after her mother passed away, but it did not work out and she got separated from her husband to live with her father, Nakula Bhuyan who runs a beetle shop to earn a living following the closure of OTM (Odisha Textile Mills) some 20 years back. As it turned out, Rina was taught by her father to never beg to anybody for anything and her determination to never be a burden to her own father made her search for income.

With the help of a social activist, her search ended with the news paper hawking job as it did not need any investment, which she never had anyway. And barring some initial hiccups, she became a household name in the town. As she describes it in her own words, “In the initial days, it was a bit awkward for me as a girl to cycle around distributing newspaper. But gradually it became easier and people started accepting my job.”

The social activist, Manas Samal who helped her get the job said, “When I asked her about her plans, she said that she will become a newspaper hawker. Once I took her to the news paper point and introduced her to the wholesaler, she never looked back and earned her living.”

Interestingly, her day does not end here. After she finishes her news paper job, she comes home at around 11 O’clock and starts preparing lunch for two, calculating her earnings in the meantime. She works at a local electronics shop in the evening to make some more bucks that helps her stay afloat in this cut throat market where prices of daily essentials rise like rockets leaping to outer space. The evening job helps her repay the debt as well which she obtained to make an asbestos house for herself and her father.

“She was a girl who never thought herself as week. After her husband left, she took it upon herself and earned through news paper hawking,” boasted a proud Nakula.

Too proud to ask for assistance even from the government, she laments the State government’s lack lustre attitude in helping out divyangs. With only Rs 500 as government’s allowance, if she had not worked as a paper hawker, she would have to beg for alms on the streets. However, she could do with a two wheeler. “Given the nature of my job, it would be a lot easier and less time consuming if I could get a two wheeler,” she says.

To say the least, she is not the only example of women empowerment. In fact there are a lot of Rina’s in our villages and towns who need to be recognised in order to attain the true value of women power as a saying goes, “Feminism isn’t about making the women strong. Women are already strong. It is about changing the way the world perceives that strength.”