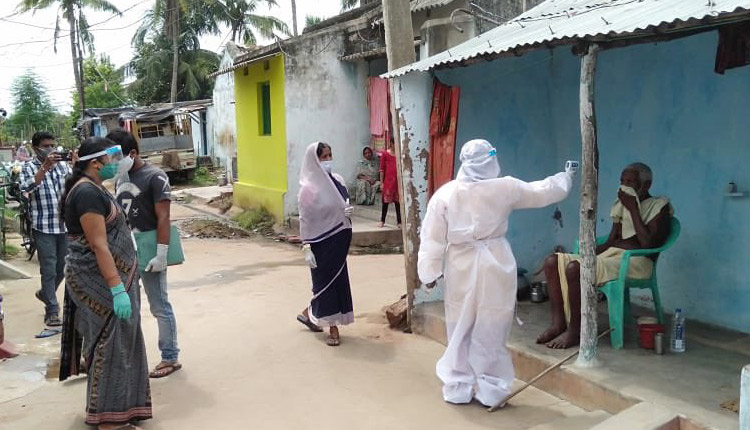 Bhubaneswar: While the national Case Fatality Rate (CFR) is progressively declining, the Centre’s focus is now on 13 districts concentrated in eight States and Union Territories with a high caseload and CFR higher than the national average.

Ganjam district in Odisha is among these 13 districts which account for about 14 per cent of the COVID deaths and nearly 9 per cent of India’s active cases.

Kamrup Metro in Assam, Patna in Bihar, Ranchi in Jharkhand, Alappuzha and Thiruvananthapuram in Kerala, Lucknow in Uttar Pradesh; 24 Paraganas North, Hooghly, Howrah, Kolkata and Maldah in West Bengal; and Delhi are the other hotspots mentioned in the Health Ministry’s recent revelation. They also report low tests per million and high confirmation percentage, added the Ministry.

On the other hand, Ganjam District Collector Vijay Amruta Kulange today said the active caseload has declined and with many patients recuperating from the disease recently, the recovery rate has improved to 78%. “I am happy to announce that so far there are no reports of symptoms reoccurring in the discharged patients, and almost 1000 of them are discharging their responsibilities by becoming Covid Bandhus. It is the result of their counselling that many have voluntarily come forward for testing,” said Kulange.

In a meeting chaired by Health Secretary Rajesh Bhushan on August 7 and 8, the officials observed that coordinated, graded and pro-active management of COVID-19 by the Union and State, UT governments ensured the national Case Fatality Rate (CFR) to come down to 2.04% (present data).

However, around 13 districts concentrated in 8 States & UTs have 9% of India’s COVID-19 active cases and 14% of the fatality, which is higher than the national CFR average.

For collaborative management of COVID-19, two high-level virtual meetings were held to engage with the States in order to advise and support them on efforts to prevent and reduce mortality due to COVID-19.

A surge has been observed in the daily new cases in four districts – Kamrup Metro in Assam; Lucknow in Uttar Pradesh; Thiruvananthapuram and Alappuzha in Kerala.

The vulnerable States have been advised to address the issues of low lab utilisation – less than 100 tests per day for RT-PCR and 10 for others; low tests per million population; decrease in absolute tests from last week; delay in test results; and high confirmation percentage among the health care workers.

They were also advised to ensure timely referral and hospitalization in view of reports from some districts of patients dying within 48 hrs of admission. Further, they were directed to ensure the availability of ambulances with zero tolerance for refusal.

The meeting also discussed the need to ensure monitoring asymptomatic cases under home isolation with special focus on physical visits, phone consultation on a daily basis. States were asked to ensure a timely assessment and make advance preparedness for infrastructure – ICU beds, oxygen supply etc., based on the prevailing caseload and the estimated growth rate.