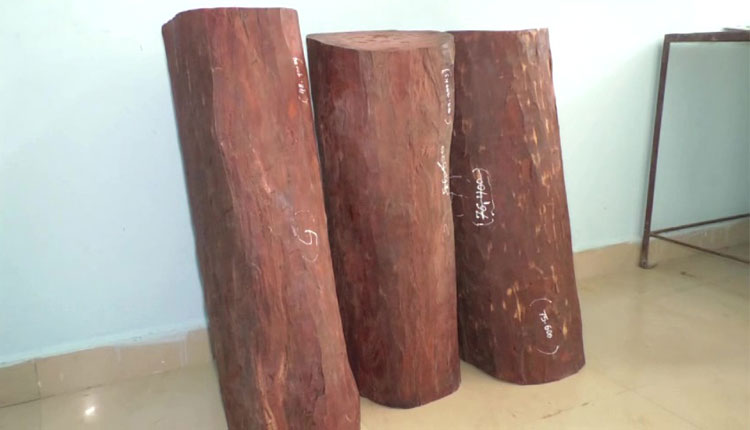 Paralakhemundi: Two persons were arrested on Sunday on the charges of smuggling Red Sandalwood in Gajapati district. The accused were transporting 150 Kilograms (three logs) of Red Sandalwood logs in an auto-rickshaw.

Acting on a tip-off, a team of forest department of Mahendra and Devgiri forest range conducted a raid and intercepted the auto-rickshaw.

According to Rath, both the accused are being interrogated to ascertain the source of procurement and supply route.

On December 4, 2020, the Special Task Force (STF) of the Crime Branch had arrested three sandalwood smugglers and seized a huge quantity of the aromatic timber of over Rs 70 lakh from their possession in Tangi area of Cuttack district.

The accused were identified as HemantaChatois and KanhuChanranBhoi of Tangi area and Dandapani Das of Khandapada area in Nayagarh district.

Similarly, three persons including two from Odisha were arrested by Andhra Pradesh in August 2019 for their alleged involvement in smuggling of red sandalwood.

A senior officer of Melliaputti Police Station, Andhra Pradesh had informed that over 200 kg of red sandalwood was being illegally smuggled in a car en route to Vizag from Paralakhemundi of Gajapati district when the vehicle was intercepted.

What Is In Store In May 2021, After 2 successive years of cyclonic May?