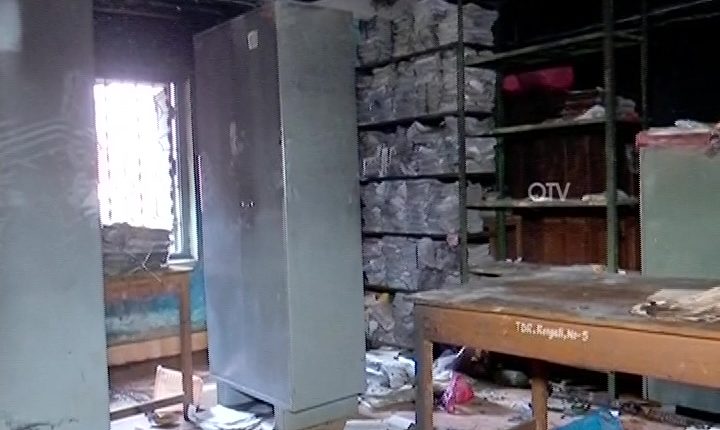 Sambalpur: In a bizarre incident, Rajib Kishan, a local resident of Sambalpur, who claims to be a victim of administrative apathy, set the Rengali Tehsil office here on fire Friday morning.

Kishan in a video released through social media site after setting the office ablaze, has clarified that he took the extreme step out of years of frustration in failing to get justice from the administration and the court after losing his land.

The youth alleged that his land was deviously sold to someone else through the tehsil office in 2004 and since then he has been pleading the Tehsildars to reclaim his land but to no avail. He further mentioned about seeking judiciary intervention to get justice over the matter but also failed in doing so.

Krushak Meher, the peon of the office and the only eye-witness to the act told media, “I was some distance away when Kishan came the youth came and lit a tyre and threw into one of the office chambers. I stood helplessly as he was in anger to take revenge.”

Fire engulfed several rooms of the office burning many important documents and appliances to ashes. Fire brigades were pressed into service to put out the fire.

Tehsildar Sunil Meher informed many official documents were lost as the computers were completely damaged, however, the record room was intact during the incident.

“The corrupt officials acquired my land illegally. They didn’t listen to my plea when I approached them and filed a complaint to get my land back.  Therefore, I decided to burn the entire office in vengeance,” said Kishan.

After the incident, police reached the spot and took the youth under arrest. Further probe is underway into the case.