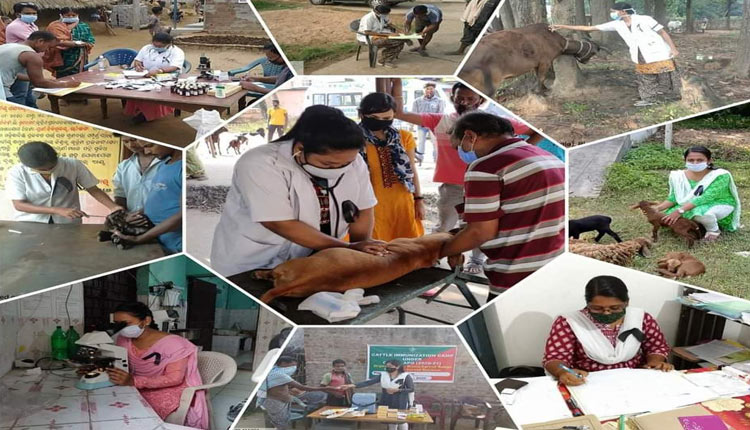 Bhubaneswar: Protesting the alleged apathy of the State government towards the functioning and management of the department of Animal Resources Development (ARD), the veterinarians across Odisha have resorted to symbolic protests for more than ten days now requesting the government to fulfil their demands.

The Odisha Veterinary Services Association (OVSA) has alleged that despite their involvement in all emergency operations, ARD has never been treated as an emergency department by the State government.

Their major demands include designation of State Veterinary services as Essential Emergency Services and extension of Corona Warrior status to the Veterinary cadre of the Animal Husbandry Department.

This apart, they have urged the government to facilitate them with adequate infrastructure, logistics and human resources for digitization of the ARD. In addition to this, they have demanded ‘Group A’ Status at entry level for Veterinary Graduates in Animal Husbandry Department. The association further wants a complete parity with medical doctors of the State and Central governments.

Though services provided by OVSA haven’t stopped even for a day, the Vets across the State were seen wearing black badges and have temporarily halted the online activities like uploading reports and returns. They have also threatened that if their demands are not met, they will completely withdraw services being provided across all online platforms, sources said.

Meanwhile, the Indian Veterinary Association has come out in support of the OVSA in the fight for the rights of Veterinarians of the State. “We support the demands of OVSA in all respects and request State government to kindly consider and fulfil them. It is further submitted that in spite of repeated request, OVSA has been forced to protest and the Veterinarians from across the country stand by them. We request the government to fulfil their justified demands in the interest of the State,” said IVA President Dr Chirantan Kadian in a letter to Odisha Chief Minister Naveen Patnaik.

As of now, the state veterinary association awaits decision of the government in this regard.