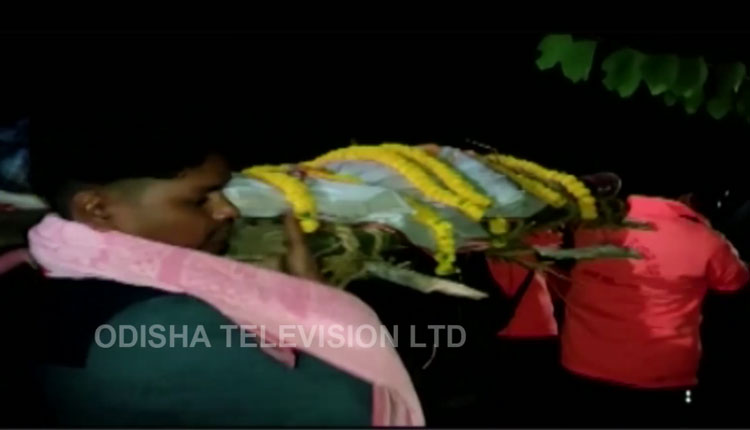 Kendrapara: In an incident that has once again brought to light the deep-rooted caste divide in society,  members of Maa Sarala Help Foundation, a voluntary organisation performed the final rites of a government school teacher at Rajanagar last Friday after villagers and relatives allegedly refused to touch his body for cremation as the deceased had married outside the caste.

According to reports, Ajay Palai a teacher from Kandira village under Rajanagar block in Kendrapara had died due to prolonged illness. Following his death, his body was taken to his paternal home. However, neither his family members nor did the villagers touch his body, it is alleged.

During his service in a government school, Palai had fallen in love with one of his colleagues, who belongs to a lower caste. Despite his family’s disapproval, Palai had tied the knot with her. Following the marriage, his family and villagers made him an outcast. Following the social boycott, Palai had to leave home and live separately with his wife and children.

Even after his death, the caste stigma allegedly continued to haunt his family and villagers. His kin and kiths also allegedly didn’t touch his body with the fear of being socially boycotted by the villagers.

Palai’s son said, “We requested our family members and people from our community to lend us hands in cremating my father’s body, but no one turned to help us.”

“They (villagers) demanded Rs 60,000 to include us in their caste fold. Then only they could help in my husband’s cremation. Our cries for help fell in deaf ears,” said Palai’s wife.

A member of Maa Sarala Help Foundation, whose volunteers chipped in to give the final respects to the departed teacher, said, “It is disheartening to see such taboo in a civilised society. People are still getting outcast for inter-caste marriage. When Palai Sir’s body lied unattended for more than 12 hours, we came forward and performed his last rites as per Hindu tradition.”

Was There A Silent Coup Within BJD To Topple The Naveen Government In Odisha?