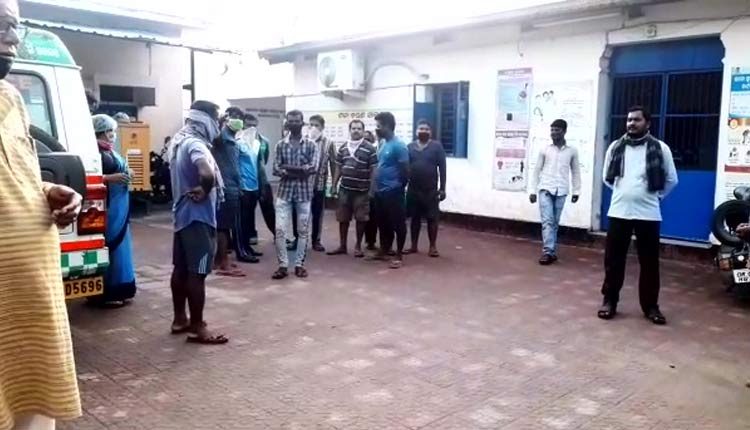 Balasore: A youth who was lodged at a quarantine centre in Jalada Nodal School under Khaira Police limits of Balasore district died due to the delay in treatment after an ambulance allegedly refused to take him to the hospital.

The deceased has been identified as Bipin Bihari Mallik, son of Gobinda Mallik, a resident of Jalada area in the district. Bipin was working in a hotel in Mumbai and had returned to Odisha with his elder brother Madhusudan Mallik on May 29.

Sources said, Bipin and Madhusudan boarded a Shramik Special train on May 27 and reached Bhadrak Railway Station on May 29. Later, they were directly taken to the quarantine centre at Jalda Nodal School.

On Wednesday evening, Bipin complained of severe chest pain following which his brother called the 108 and 104 health helpline numbers and requested for an ambulance to shift Bipin to a hospital.

However, Madhusudan alleged that the concerned authorities refused citing they were not allowed to facilitate patients who are lodged at quarantine centres.

“After helpline numbers- 104 and 108 refused to send any ambulance to the quarantine centre, we took Bipin to Soro Community Health Centre (CHC) on a bike. However, he died while undergoing treatment at the CHC,” alleged Bipin’s brother, Madhusudan Mallik.

On the other hand, Soro CHC Superintendent, Satyanarayan Nayak stated, “The youth was suffering from severe chest pain. Though he was given preliminary treatment, he succumbed after 10 minutes. He was not having any symptoms of COVID-19 and died of heart attack.”

In another incident, a woman, who was under home quarantine, was found hanging from the ceiling fan of a room in her house at Baksama village under Kuchinda Police limits in Sambalpur district today morning.

The woman identified as Pallavi, wife of Papu Pasayat of Baksama, had recently returned from her maternal house in Andhra Pradesh. She was initially kept in government quarantine and later sent on home quarantine at her husband’s house. However, she was found dead today.

Police rushed to the spot after getting information and sent the body for post-mortem.