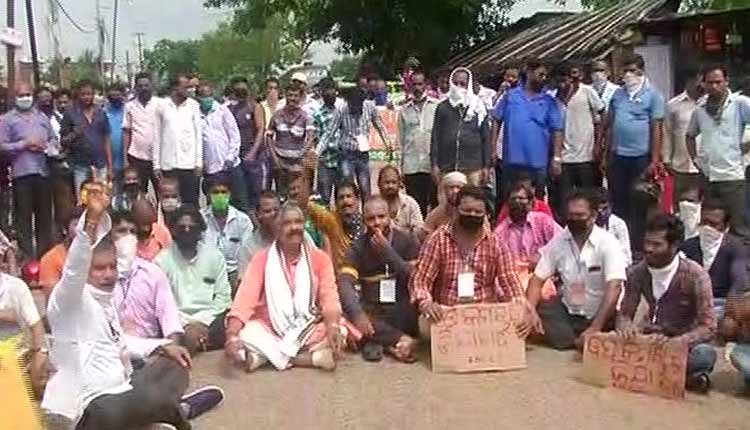 Bhubaneswar: Members of the Odisha Motor Vehicle Drivers’ Association that include drivers, conductors helpers staged a Dharna at Baramunda Bus Terminal in Bhubaneswar demanding compensation for the losses suffered during the lockdown in last three months.

Other demands of the association members include insurance coverage worth Rs 50 Lakh and recognition as employees of the State Transport department.

Senior Congress leader and Jatani MLA, Suresh Routray extended his support to the protest by alleging that though the State government has provided all kinds of assistance to the owners, bus staff like drivers, conductors and cleaners have been largely overlooked.

Routray warned the government that if the demands of the association aren’t met, the protest will be intensified & they will stage road blockades.

“State government agreed to the bus owners’ demands. We want similar commitment from the government for drivers within seven days,” demanded Routray.

A protesting bus driver said, “We have already written to the Chief Minister and the Transport Minister, but nobody seems to be concerned. Our demands are justified.”

Odisha Transport Minister, Padmanabha Behera, while responding to the demands of the association, said, “We have received their demands. As they have also suffered a lot in this lockdown, we never denied them relief.”
“Their demands are under consideration and we will make a decision soon,” assured Behera.

Commenting on the association’s threat to stop operating buses if their demands aren’t fulfilled, Behera said, “They can do whatever they want. We are not printing currency notes here in Odisha. Demands can be fulfilled based on the revenue we are generating.”
“We will take an appropriate decision only after considering the financial implications on the State’s exchequer,” said Behera.

Earlier on May 29, the Odisha government had announced relief measures for bus owners by granting them road tax exemptions.

In a notification issued by State Transport Department, tax and an additional tax of stage/ contract carriages in the State have been exempted for three months i.e. April, May and June 2020.