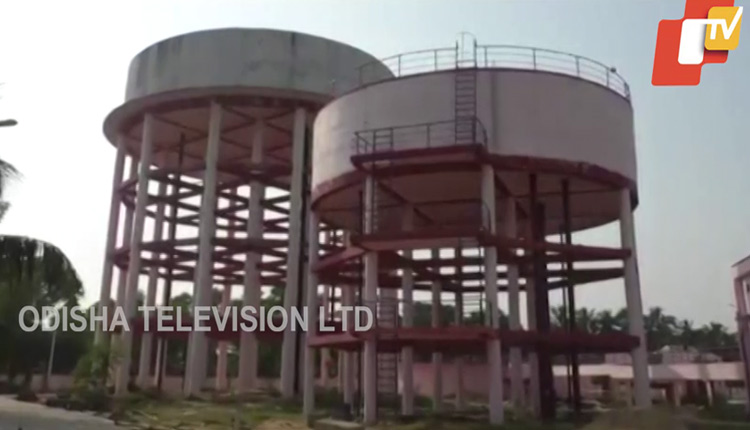 Balasore: The mega drinking water project in Bhogarai block of Balasore district has allegedly failed to serve its sole purpose, thanks to the alleged snail pace work.

Due to the presence of Fluoride in the ground water, as the region is situated along the sea, the water is unfit for drinking. With an aim to solve the drinking water crisis in the area, the Odisha government had conceptualised the mega drinking water project which would filter the water of Subarnarekha River and provide piped water to the households in Bhogarai.

Although the project was inaugurated by Chief Minister Naveen Patnaik in 2017, people of Bhogarai are reportedly yet to avail the benefits of the much-hyped project.

Though the first phase work of the project is yet to be concluded, the concerned authorities are reportedly planning to begin the second phase work.

Alleging a nexus between the company which has taken up the project and the local MLA, a resident of Bhogarai, Santosh Jena said, “When the tender was submitted, the engineers must have set a deadline to complete the project. But as there is no complaint by the locals, the concerned company is delaying the project. Besides, the local MLA also do not keep tab on the pace of work.”

The fund for the mega project was sanctioned in 2015-16 following which the construction work was handed over to L&T company.

As per the proposal, the mega project would cater to the drinking water need of 132 villages of Bhogarai in the initial phase and would later provide drinking water to around 14,000 households. The deadline to complete the project was 2019.
At present, only 4,630 households have been connected with the piped drinking water, said the authorities of L&T.

Meanwhile, the company claimed that due to the change in the agreement and delay in acquisition of land, the project could not be completed in the stipulated time.

Stating that Bhogarai is the only place in the State with two mega projects, Bhogarai MLA Ananta Dash said, “One of the projects was started around five-six years back but there were some technical faults in the design, which have not been clarified yet. The people of Bhogarai will definitely get piped drinking water supply at their homes soon.”

“The construction of the project has not got delayed. The scope of the work, as per old plans was over but later there were some modifications in it which delayed the project. However, the work is underway and 98 per cent of the same is over,” informed, Tanmay Roy, official of L&T.

It is to be mentioned here that an agreement worth Rs 211 crore has been signed by the State Government and Mumbai-Based JMC Projects for the second phase work of the project. At least 123 villages in Bhograi block will be connected with piped drinking water supply in the second phase.