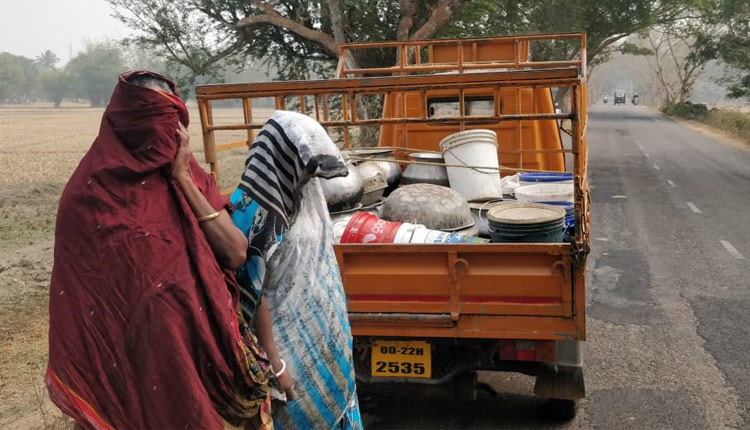 Bhadrak: Continuing its drive against the illicit liquor business, Bhadrak Police on Thursday arrested two persons – a woman and her daughter-in-law on charges of selling spurious liquor at Ghusuripokhari village under Bhadrak Rural Police limits. The former is a homemaker, while the latter happens to be a Civil Engineer by profession.

Based on a tip-off about running of an illegal liquor manufacturing unit, a team of police conducted raid on the house of Aladi Singh and found country liquor in barrels for sale at the backyard of her house. The engineer daughter-in-law Saraswati Singh was also caught by police. Aladi’s two sons, who are also said to be well-educated, managed to give the cops a slip.

Following the raid, police seized more than 1000 litre of country-made liquor and items used for manufacture, apart from Rs 1 lakh cash and some vehicles which included a four-wheeler.

Locals were in complete disbelief finding a civilized family’s involvement in the country liquor trade.

SDPO Sarthak Ray informed, “Acting on the direction of SP, raids are being conducted by police personnel across the district to curb the menace of spurious liquor. Bhadrak Rural Police received information from a person regarding heavy availability, illegal manufacture and sale of liquor. A team led by the IIC raided a house in Aradipada area. Close to 1200 litres of ID liquor, an INDIGO car and Rs 1 lakh cash has been seized. Two accused have been arrested while further investigation in this connection is underway.”

In the last 48 hours, Bhadrak Police has arrested six more persons based on cases registered at different police stations over sale of illicitly distilled (ID) liquor. During the period, police recovered 170 litres ID liquor from their possession.