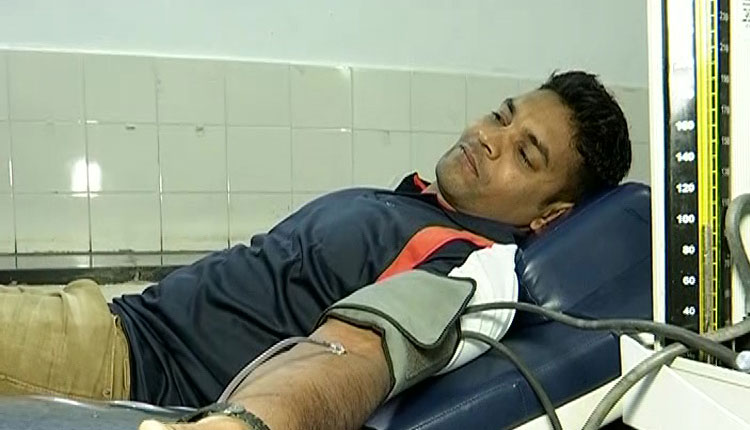 Malkangiri: In an extraordinary humanitarian gesture, two employees at the Malkangiri sub-jail saved the life of an under-trial prisoner (UTP) by donating him blood.

The UTP, identified as Durua Lacha, has been lodged in the jail following his arrest in a murder case three years ago. Recently, he fell sick and was shifted to the district headquarters hospital.

Doctors at the hospital who performed test on him prescribed infusion of blood as he was anaemic. As none of Lacha’s relatives volunteered to donate blood, constables Rabindra Choudhury and Arun Panda, both working at the jail, came forward to donate blood in order to save Lacha.

Following infusion of fresh blood, Lacha’s health improved and now he is stated to be stable.

“He was suffering from anemia. When we rushed him to the hospital, the doctors advised us to arrange blood donors. When the relatives of the UTP did not come,  we decided to donate him blood,” said Rabindra Choudhury.

Another blood donor, Arun Panda said, “Lacha is a human being first then a prisoner. As he needed blood, we initially tried to arrange donors outside and later donated the blood.”

While the death of a under-trial prisoner at the jail last month had raised question on the management, the humanitarian act of the two jail employees has drawn appreciation from all quarters.

On December 27, the UTP Danu Golori,  a resident of Khajuriguda of Swabhiman Anchal in the district, had died under mysterious circumstances during treatment at the district headquarters hospital.

According to sources, Golori was found in a critical condition with his throat slit. Jail authorities had shifted him to the district headquarters hospital immediately. However, he died while undergoing treatment.