In Governor Ganeshi Lal's speech, Puri and Lingaraj Heritage Corridor take precedence over issues of farmers and farming. 'Employment' word mentioned only thrice and 'Aspiration' mentioned for once only 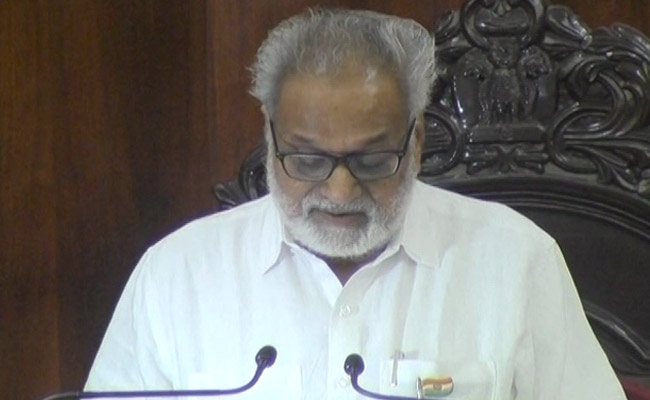 Bhubaneswar: In his inaugural address at the beginning of the budget session of Odisha Legislative Assembly on Friday,  Governor Ganeshi Lal harped highly on 5T and Mo Sarkar-powered consultative governance to bring in real transformation and take Odisha to new heights.

“Consultative governance is core of our growth trajectory. My Government’s current focus is transformation. Real transformation cannot take place without greater participation of people in the process of governance. The new initiatives of 5T and Mo Sarkar are formulated and vigorously being implemented. With people at forefront of all initiatives, my Government is striving hard to take Odisha to new heights,” said Governor Lal.

How prominently the Governor’s speech has the imprint of 5T and Mo Sarkar, State’s government’s new-found love, is evident from the fact that when ‘5T’ saw nearly 7 mentions in Guv’s speech, ‘Mo Sarkar’ and ‘People’ found 8 mentions each in nearly an hour-long speech of Governor.

The 5T and Mo Sarkar seem ubiquitous in Governor’s address. In his speech Lal said, “Under 5T model of governance, my Government has planned for comprehensive mineral resource mapping of the entire State to assess the quantum of mineral resources, its valuation and development potential.”

In contrast, when the word ‘Aspiration’ finds only a solitary mention, the word ‘Farmers’, has been mentioned for 4-times in Governor’s  speech. Employment found 3-mentions.

Moreover, when customary address of the Governor usually lists out the priorities and agenda of the State Government, an analysis of the speech tells a tale.

In Governor’s speech,  Puri and Lingaraj Heritage corridor gains precedence over the issues of farmers and farming.

In his address, Governor first mentioned “My Government has taken a historic step to transform the infra facilities around Shree Mandir at Puri and Shree Lingaraj Temple at Bhubaneswar.”

Soon after stating, Guv Lal mentioned the programmes launched by Odisha Government in Agriculture and welfare measures thereby initiated for the farmers.

Hailing KALIA Programme, Governor said, “In the coming year, KALIA scholarship for children of KALIA beneficiaries is targeted to extend support to 50 lakh small and marginal farm families, besides 25 lakh landless farm households.”  A  Mo Sarkar desk has also been opened in every district to take on farmer programmes at  a greater pace, Governor said.

AGRICULTURE: Primary Agricultural Cooperative Societies will be made “One Stop Destination” for farm families to meet all requirements of farm operation with hassle free credit and marketing of agricultural produce, custom hiring of farm equipments and micro ATM facility under one-roof.

*During 2020-21, Government plans to take up modernisation work of about 200 MI tanks under the WB-funded Odisha Integrated Irrigation Project for Climate Resilient Agriculture.

HOUSING: Nearly 2 lakh houses under different rural housing schemes have been completed with an expenditure of Rs 4,072 cr by December end 2019.

EMPLOYMENT: Odisha government provided employment to 19 lakh households through 5.598 lakh projects. A total of 44,090 families completed 100-days of work. Under MGNREGA, average days of employment provided per household is 36 days.

*Initiative of 24X7 Drink From Tap Mission launched on pilot basis for supplying assured quality water in a phased manner. Pilot implementation in 8 zones in 2 cities – Bhubaneswar and Puri – started.

*New scheme NIRMAL introduced to bring in a paradigm shift in the sanitation and public health facilities in our hospitals.

*Government will make all endeavours for propagation and promotion of Odisha language and culture.

*10 acres given for Paika Bidroh.

10000 Steps A Day May Not Prevent Weight Gain