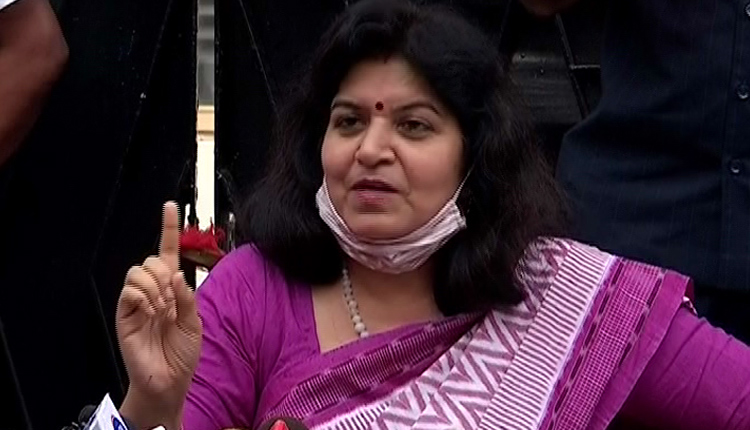 Bhubaneswar: The Lok Sabha member from Bhubaneswar, Aparajita Sarangi on Sunday wrote an open letter to Odisha CM Naveen Patnaik alleging him of destroying the heritages in Puri and Bhubaneswar in the name of beautification.

In a scathing letter, Sarangi stated that, “I would consider the present heritage development in Srikshetra and Ekamra Kshetra as one of the most unique initiatives in the world where heritage is sought to be conserved by destroying it.”

“Some of the most sacred ‘mathas’ of Puri, namely, Emar Matha, Mangu Matha, Languli Matha, Uttar Parshwa Matha and Dakshin Parshwa Mathas have been demolished and razed to the ground. I would like to know which ‘heritage conservationist” is advising your Government on demolishing monuments which are integral to the growth of Jagannath cult; demolishing mathas established by the holiest of Indian saints, namely, Acharya Ramanuja and Guru Nanak; the reasons for demolishing mathas which are integral to the daily rituals of Lord Jagannath and also the basis on which it was concluded that replacing these ‘invaluable’ monuments with manicured lawns, fountains and toilets is going to enhance the spiritual experience of visitors coming to pray to Lord Jagannath! I would be very keen to know which “heritage conservationist” was monitoring and guiding the reckless demolition using heavy earth moving machineries like JCBs, Bulldozers and Jackhammer drills in an extremely sensitive zone and in areas which are sentimentally, emotionally and spiritually two of the most sacred sites for the Hindus,” she stated.

“My interaction with different range of stakeholders has revealed that there is a lot of doubt regarding the architectural firms which are preparing the Development Plans for Puri and Ekamra Heritage Corridor Project. The procedure for selection of these firms, their scope of work, the verification process with regard to their credentials for experience in heritage development, who issued the work orders to them, etc. are questions to which the people of Odisha deserve an answer,” Sarangi said.

“It is all the more painful to learn that Mathas associated with the most revered saints have been razed to the ground. People are left with a sense of disbelief that Mathas/heritage monuments which were so closely associated with our religious belief system, integral to the daily and special rituals of Lord Jagannath, have been demolished,” the Parliamentarian said to the Chief Minister through the letter.

Writing about the promised compensation to the beneficiaries, Sarangi stated, “During my interaction with the affected stakeholders I have been informed that many of them were assured a certain amount of compensation before taking up demolition, but the actual amount received by them is much below the promised amount. They have also indicated use of certain intermediaries for disbursement of the compensation and large scale swindling by such intermediaries. While I have no means of authenticating the veracity of this allegation, for the sake of “Transparency” under the ‘5T’ initiative, it would make sense to publish the list of Sevayats and vendors/shopkeepers and the compensation paid to them so far.”

Terming the protest over NMA Bylaws as ‘Diversionary tactics’, Sarangi said, “Considering the situation above, I think the recent hullabaloo relating to draft by-laws was nothing but a diversionary tactics to deflect the attention from such careless demolition of heritage structures, inability to carry the stakeholders on board and failure to prepare an Architectural/Development Plan which conforms to the provision of AMSAR Act, 1958 and which would pass the scrutiny of NMA/ASI. Otherwise, the State Government would not have hesitated in forwarding the Detailed Project Reports to NMA for the required approval, that too after the personal visit of DG, ASI to Bhubaneswar on 22nd December 2019 and her request to the state government to send the proposal to NMA so that permissible activities can be concurred in quickly.

Laying out some suggestions in this regard, Sarangi further wrote, “I would fervently urge you to set up a Committee consisting of Senior Officials of ASI, Archaeology Department of State Government, representatives of INTACH and a few Heritage Conservationists to assess the scale of destruction and examine whether existing laws have been violated or not. In case existing laws have been violated, then accountability must be fixed and the people responsible for destruction of centuries old heritage and legacy must be taken action against. I would request you to cause an enquiry to see whether provisions of the Acts and Conventions have been violated while taking up such demolition of centuries old structures.”

On the other hand, comments in connection with the remarks made by MP could not be obtained either from the government or the ruling party.