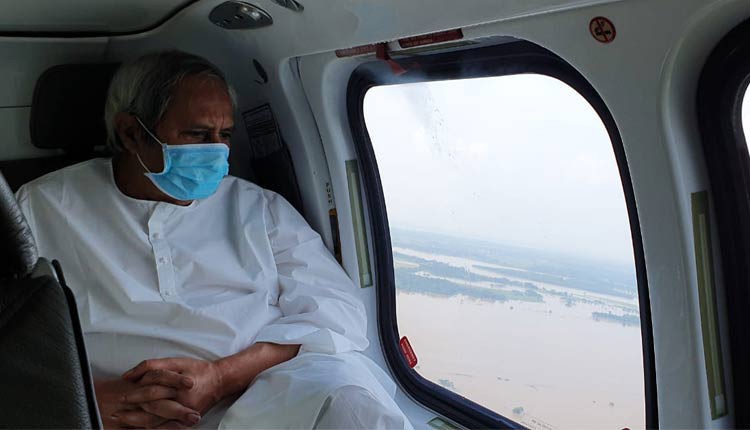 Bhubaneswar: Odisha Chief Minister Naveen Patnaik on Monday announced to provide an immediate assistance of 50 KG rice and Rs 500 to each families in the severely flood-hit districts of the State.

The announcement was made after the Chief Minister conducted an aerial survey of flood affected areas in the State today.

After the aerial survey, Patnaik reviewed the relief and restoration works at a high-level meeting. Several areas in the districts of Balasore, Bhadrak, Jajpur, Kendrapara, Jagatsinghpur, Cuttack, Puri and Cuttack have been adversely-hit by the floods.

Apart from government infrastructure, extensive damages have been caused to houses, roads and communication has been snapped in several areas in the State.

The Chief Minister also appealed people in flood-hit areas to follow COVID-19 guidelines and social distancing norms. As per preliminary assessment, 110 blocks, 3990 villages and 21 municipalities in 20 districts of the State were affected by the recent floods.

Here are the key announcements made by Chief Minister Naveen Patnaik–

-Cooked food will be provided to people as long as they will stay in various shelter homes.

– 50 Kg rice and Rs.500 will be provided to all families in the villages which have been severely affected/inundated/marooned in the current flood.

– One polythene sheet to each deserving household whose house has been damaged.

– House Damage Assistance will be paid as per SDRF norms.

-Collectors to take steps for assessment of house damage within 15 days and disburse the assistance in the next 7 days.

– Assistance for clothing and utensils as per SDRF Norms.

– Cattle feed assistance to dairy farmers as per SDRF Norms.

– Exemption of User Fees for vaccination and treatment of livestock and others animals in flood-affected areas.

– Free animal check-up camps in affected areas. For all other affected districts, assistance shall be distributed as per SDRF norms.

COVID-19 Peak In Bhubaneswar, Active Cases To Cross 5000 By September 15