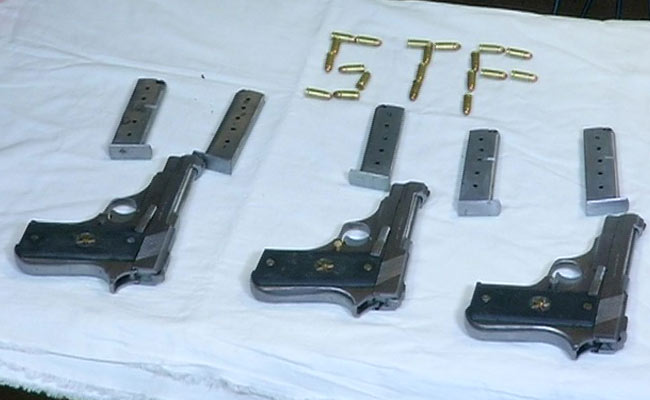 Bhubaneswar: Involvement of students in organised crimes seems to be on the rise in Odisha. This was evident after the Special Task Force (STF) of Odisha Crime Branch on Monday arrested a student of a private college for his alleged involvement in illegal arms trade.

The accused, who disclosed his name as Shanu Poddar from Jharkhand, is reportedly a BBA student in Bhubaneswar. Three 7.65mm automatic pistols, five magazines, 22 rounds of live ammunition have been recovered from his possession.

Shanu was nabbed while he had come to deliver the weapons to one Suresh Panigarhi near ITR College in Khandagiri.

Sources said the ammunition carry the stamp head which suggests that they were manufactured by Ammunition Factory at Kirkee, Pune.

It is alleged that Shanu had struck a deal with Panigarhi to sell the firearms at Rs 1 lakh each. It is suspected that the weapons were procured from Bihar.

“Acting on intellegence input, we intercepted one dealer and buyer and recovered the sophisticated weapons along with ammunition,” said STF DIG, J.N. Pankaj.

Sources said the arms dealer is suspected to have links with some banned outfits like the naxals and further probe in this connection is underway.

“Steps are being taken to ascertain the source of procurement of the firearms and the persons or the gangs to whom such weapons would have been delivered. Whether there is involvement of inter-State gang behind the arms trade or not will also be investigated,” said a senior official.

Pankaj further informed that the accused will be soon brought on remand to carry out further probe in the case.

It is pertinent to mention here that Commissionerate police had launched ‘Operation Black Smoke’ and seized several firearms during an intensified crackdown on illegal arms trade in the twin city of Cuttack and Bhubaneswar last year.