Bhubaneswar: Odisha will record a massive over 50k new Covid-19 infections in the next 30-days, if the current rate of growth continues, predicts an IIT Delhi Covid-19 researcher. If the…

Bhubaneswar: Odisha will record a massive over 50k new Covid-19 infections in the next 30-days, if the current rate of growth continues, predicts an IIT Delhi Covid-19 researcher.

If the outbreak model prediction is to be believed then the second wave in the State will peter out in June. Moreover, predicting the peak of second-wave in State in May, the model, however, estimates the peak in this round will have lower cases vis-a-vis the first wave.

As per IIT Delhi professor Souri Chatterjee, author of the mathematical model, Odisha with the current rate of growth in daily new cases, is projected to record over 4 lakh cases by May from 3.49 lakh today (April 11).

Simply put, the State is going to add over 50k new cases in the next 30-days. (see the image below).

The mathematical model has also projected daily new cases for Odisha (see the image below). 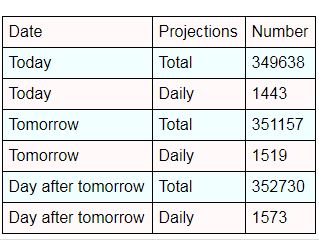 As per the prediction, the active cases in the State during the peak will remain half of what was in the first wave (see the image below).

The mathematical model predicts that unlike the first wave when daily new cases had crossed the 4k mark to touch nearly 4,350, the daily cases in the second wave will hover below 2000 (see the image below)

THE BASIS OF PREDICTION

“All analyses and projections have used simple hyperbolic tangent curves (modified as the logistic curve). Each tiny outbreak is modelled as T/2⋅(1+tanh((x−d)/α))T/2⋅(1+tanh⁡((x−d)/α)), where T is the total exposure of the outbreak, x is the date, d is an offset, α is nothing but a scaling constant that changes from outbreak to the outbreak because of underlying ground truths,” reads a statement of the Model author.

His elaboration on what is tiny outbreak model?

For example, an outbreak in Dharavi, Mumbai would follow one such trajectory. The complete data for the state will be the sum of many such micro-outbreaks, i.e.C(x)=N∑i=0Ti/2⋅(1+tanh(x−diαi))

A close look at the model predictions shows that this is a purely mathematical projection based on the current infection numbers of an aggregate of the tiny outbreaks in a State.

The model, unlike the SUTRA model of IIT Kanpur, didn’t take into account the vital epidemiological factors like – the ‘contact rate’ -means how many people an infected person infects every day, the ‘reach’ or the exposure level in a State and the ratio of detected and undetected cases.

THE BOTTOM LINE: Given the limitations of the model, the probability of the forecast turning true for Odisha looks very limited.