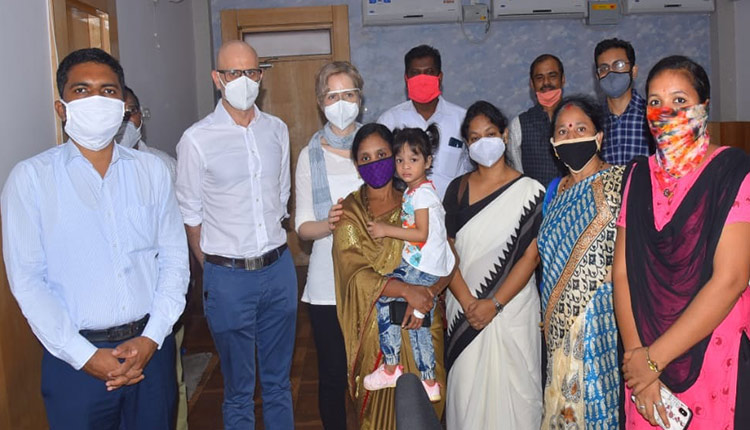 Gajapati: In the first international adoption from the district, a couple from Italy took the custody of a girl child after completing the necessary formalities in the presence of the district Collector, Anupam Saha, on Thursday.

On the occasion, two more girl children were also adopted by an equal number of couples from Kolkata at the Collector’s office.

The three children were found abandoned by the officials of the Child Welfare Committee (CWC) at separate places in the district during the Covid-19 induced lockdown and the shutdown that followed. Later, the three girls were shifted to SAA NISSAN Shamlon Children Home, a child care centre in Paralakhemundi, and their profiles were uploaded in the official website of the Central Adoption Resource Authority (CARA) for adoption.

The three couples, including the Italian pair, found the girls on the website while going through several profiles for adoption purposes.

Following due procedures and protocols, the couples were enlisted for adopting the three girls. Later, after getting the custody following an order by the District Judge Court, the girls were handed over to the three couples by the Gajapati district administration, informed Collector Anupam Saha.

“Earlier, families from several states of the country, including Delhi, had adopted children from the district. However, this is for the first time the district administration has allowed adoption by couples from abroad,” said Saha.

Though the Italian couple were not allowed to talk to media persons, the husband-wife appeared delighted in adopting the girl as their daughter.