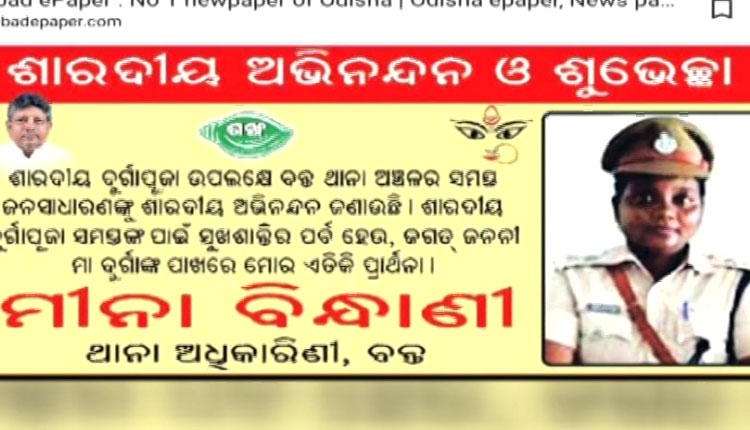 Bhadrak: A police officer in Bhadrak district has courted controversy for extending Durga puja wishes through a newspaper advertisement.

As per reports, the newspaper advertisement carries the photograph of Mina Bindhani, the inspector-in-charge of Banta Police Station.

However, controversy has erupted over the advertisement which also carries the photograph of Bhandaripokhari MLA and symbol of ruling Biju Janata Dal (BJD).

The clipping of the newspaper advertisement has now gone viral on social media.

BJP leaders have condemned such an advertisement and demanded stern action against the concerned police officer apart from a probe by Home Department which comes under Odisha Chief Minister Naveen Patnaik.

“If the cop wants to do politics, then she should resign from her post and enter active politics. It is really unfortunate the way the picture of MLA and the symbol of a party was depicted in the puja wishes. We want strict action to be taken over the issue,” said Badrinarayan Dhal, BJP leader.

The concerned police official and the MLA are yet to comment on the matter.

NO Movie Magic During This Year’s Dussehra; Ollywood Incurs Around Rs 12 Cr Loss