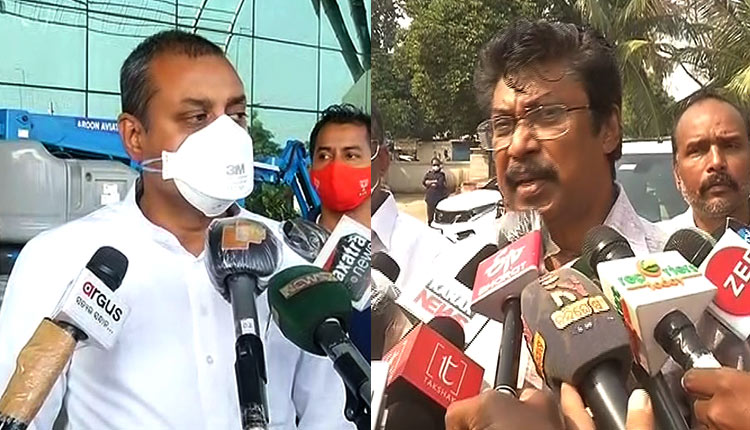 Nayagarh: Amid marathon questioning of Babuli Nayak by the court-monitored SIT in connection with the Pari murder case, delegations of the Odisha BJP and the Congress today visited Jadupur village in Nayagarh to meet parents of the deceased minor girl, giving a clear indication that protests for justice are not ebbing anytime soon.

BJP national spokesperson Sambit Patra alleged that state minister Arun Sahoo is putting pressure on Collector and SP of Nayagarh to hush up the case. “It is difficult to carry out an impartial probe as long as he (Arun Sahoo) is not suspended. The BJD party should suspend him immediately on moral grounds. The whole of Odisha is well aware of the culprits behind the kidnapping and murder of minor girl Pari. Locals in her native village Jadupur understand the situation better than anybody else. Surprisingly, no arrests have been made even after 5 months of the incident, system has collapsed completely due to pressure by politicians,” said Patra questioning the police inaction.

“I would like to thank NCPCR for issuing summons to Nayagarh SP and Collector, as per our demands. We have also demanded an independent investigation by the Commission. Meeting Pari’s family, I would let them know that this isn’t a political issue. I am here for the family as a citizen of Odisha fighting for justice to Odisha’s minor girl. We are fighting and we will continue our fight. With folded hands, I request people of Odisha to stand united to give justice to Pari,” the senior BJP leader said.

We will raise a public awareness through a mega rally in the area, so that more voices join us in the fight, he said.

The delegation also visited the spot from where skeletal remains of the minor girl were traced months back. “Be it any politician or any influential person, whosoever is found involved in the case should be hanged to death. However, the BJP’s protest is for political motives. Congress has led the protests right from the beginning and still stands its ground,” said the party state in-charge.

Reacting to the progress in the probe of the sensational murder case of the 5-year-old girl, SIT chief Arun Bothra says the team is working hard. “Give us two weeks time, we are working hard and aware of the responsibilities,” said Bothra.