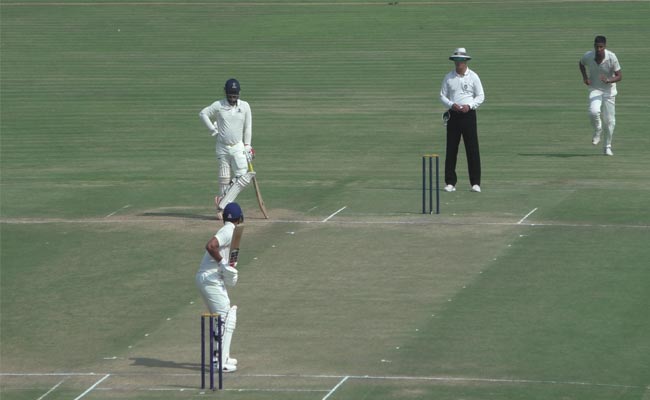 Cuttack: The crucial Ranji Trophy quarterfinal tie between Odisha and Bengal is now evenly poised and it could be anybody’s game from here. Odisha suffered a blow early on in their chase and lost their first wicket with just 10 runs on board. However, Shantanu Mishra and Debashish Samantray consolidated and added 125 runs for the second wicket. Both Mishra and Samantray scored 62 and 68 runs, respectively. Odisha were 151 for 4 at stumps on day two trailing by 181 runs.

Earlier, Bengal posted 332 runs in the first innings after they were put to bat by Odisha at Driems ground in Tangi, Cuttack. In their first innings, Bengal suffered a top order collapse and lost wickets in quick succession. The top order batsmen were seen struggling against some superb bowling by Odisha pacers- Basant Mohanty and Suryakant Pradhan.

Durga Puja: Commissionerate Police Comes Up With ‘Time Slots’ For Idol Immersion In…

Bengal lost their first wicket at the score of 17 runs and the team lost four more wickets with 46 runs on board. Bengal’s fifth wicket fell at the score of 141. However, Anustup Majumdar and Shahbaz held their ground and steadied the Bengal innings. Majumdar was the top scorer for Bengal in their first innings with 157 runs.

Cheers To Friendship! Batchmates Rescue And Admit Mentally-Challenged Friend To Hospital In Odisha

Durga Puja: Commissionerate Police Comes Up With ‘Time Slots’ For Idol Immersion In…

No Road, No Ambulance: People In This Odisha Village Allege…

Taxes On Petrol, Diesel May Go Up Further To Mobilise…

Samantha Akkineni Shares Her Love Story That Developed Amid…