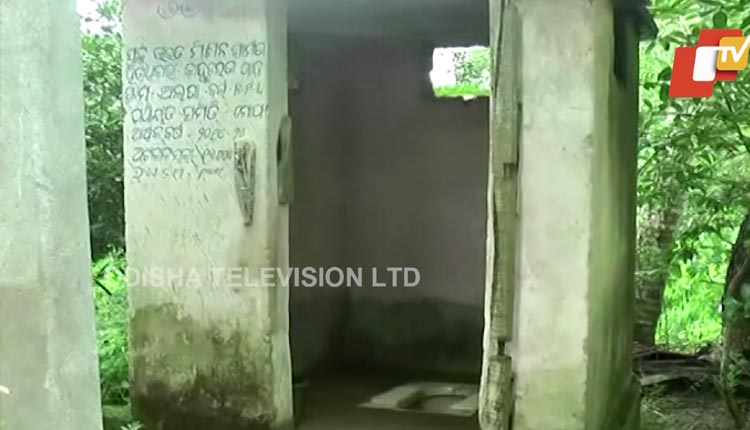 Puri: Even as the Odisha government is claiming that it’s working hard to make the State open defecation-free, allegations of large-scale irregularities in the construction of toilets under Swachh Bharat Mission (Gramin) has surfaced in Puri district.

It was alleged that funds to the tune of lakhs of rupees were siphoned off by preparing false bills in the names of beneficiaries in Gop block of the district.

“The name of another person of our village was written on the wall of my toilet by the concerned authorities. They asked me not to complaint about it and assured that we both will get the funds. The bill was also prepared, but they forced me to make rounds of the office and did not hand over the money yet,” alleged Artabandhu Patra.

Shockingly, the name of Kanhu Charan Patra was mentioned in the beneficiary list in Badamachapur village and funds meant for the toilet was allegedly siphoned off.

There are numerous allegations of misappropriation of funds meant for toilet construction in many nearby panchayats.

A signage was installed at Badamacchamara which says the village was declared as open defecation-free on August 6, 2019. When OTV reached the village for a reality check, it came to the fore that none of the residents have toilets in their houses. However, information obtained from an RTI application revealed that Debaki Kandi and Ganga Kandi of the village already have toilets.

Manorama Kandi, mother of Ganga Kandi said, “We do not have toilet, so we go to the field to relieve ourselves. We have no idea that bill was prepared for toilet in our name. It should be probed and ensured that we get toilet.”

Similar allegations have also surfaced in Putupada village of Badagaon panchayat which too has been declared as open defecation-free. However, bills were prepared in the names of beneficiaries to siphon off funds.

Purnima Mangaraj, a resident of Putupada, said, “There are 56 families in the village, but none of them have been allotted toilet by the government. Therefore, we are forced to go to the field to defecate.”

Santanu Dalai, another resident of the area said, “A proper investigation should be carried out into the misappropriation of funds meant for construction of toilets.”

Responding to the allegations, Gop Tehsildar Diptirani Das said a probe will be conducted and action will be taken accordingly.

“If we receive any such complaint, a probe will be conducted. I will send an inquiry team to the concerned villages and action will be taken accordingly,” the Tehsildar said.