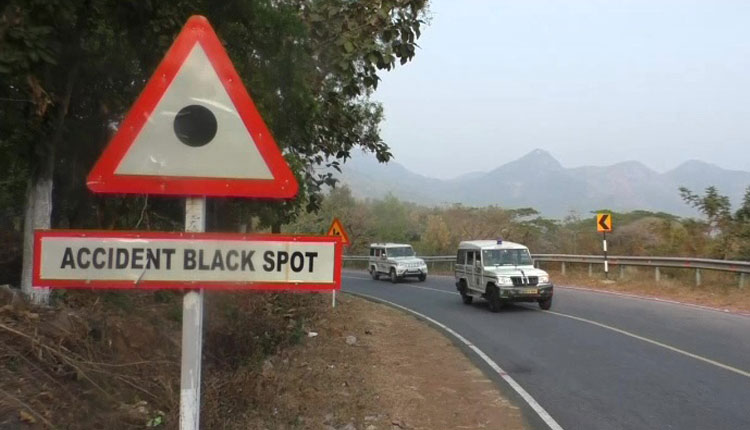 Bhubaneswar: Even as Odisha is dotted with 435 black spots which are prone to road accidents, corrective measures as well as awareness drives at the sites to reduce the mishap seems to be largely inadequate.

According to sources, the number of road accidents in Odisha was higher than the national average in 2018.

Taptapani ghat, one of the black spots in the State, witnesses many accidents throughout the year. On January 29 last year, at least seven passengers had lost their lives while 50 others injured when a bus carrying them overturned on the ghat road.

Besides, accidents of vehicles carrying picnickers, trucks, buses and cars are frequent on the ghat road. Despite being identified as black spot, occurrence of accidents resulting in fatalities continues at the site.

Similarly, Bhetkhol ghat in Phulbani which is full of curves and bends sees accidents frequently. The condition of the road is also not good enough. Despite its vulnerability, no signage or cautionary board has been reportedly installed on the stretch to caution the drivers.

“Local drivers are familiar with the stretch but new drivers frequently meet with mishaps. If information boards are installed, drivers can know there is sharp curve or turning ahead and prevent mishap,” said a truck driver, Nikunja Patel.

The black spots are not confined to remote areas only. Many urban roads are also dotted with accident-prone spots where there is fear of frequent accidents leading to injuries or death of driver and others commuters.

The Ring Road along Mahanadi River in Sambalpur district which connect to the city is also gradually turning into black spot.

“Commuters who take the route to reach the court or Dhanupali have to confront vehicles coming from other direction. So there are chances of frequent accidents on the stretch. It will definitely turn into a black spot,” said a resident, Brajendra Panda.

According to official sources, 435 black spots were identified in Odisha between 2016 and 2018. The highest number of 31 black spots was identified in Sundergarh followed by 23 in Khordha (including Bhubaneswar), 13 in Cuttack and nine in Ganjam district.

In 2019, the Union Road Transport and Highways Minister Nitin Gadkari had informed the Lok Sabha that of the 789 black spots (accident-prone places) on National Highways and Expressways across the country, 12 are in Odisha.

Meanwhile, the State transport department claimed that the black spots are identified and rectified every year.

“Identification of black spots is a continuous process as it is being carried out every year and rectification is done. After rectification, special focus is given to the spot if accidents occur again,” said State transport commissioner, Sanjeev Panda.