No Let Up In Tension On Odisha-AP Border 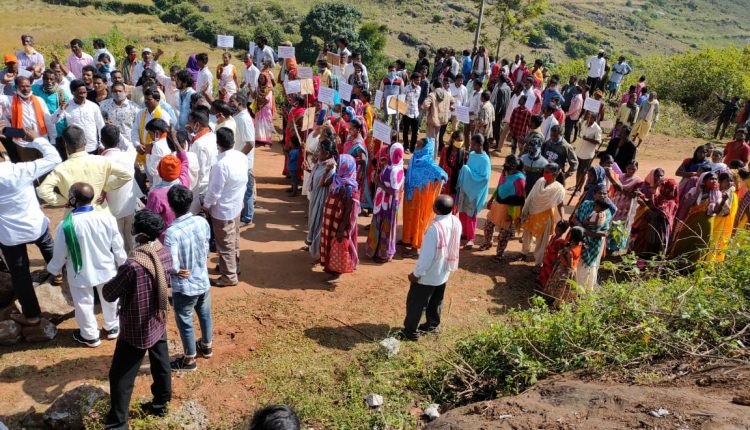 Jeypore: The border dispute between Andhra Pradesh and Odisha continues to raise its ugly head with a fresh row erupting on Sunday after some leaders and locals of the neighbouring State sneaked into Odisha territory and staged a demonstration.

According to sources, residents of the neighbouring State waved placards and raised slogan at Sambai village under Pottangi block in the district. It is said that Andhra Pradesh continues to set its prying eyes for including the region in its own territory.

Tension erupted on Sunday after a local sarpanch of Koraput district had a heated exchange of words with the protesters and leaders of Dumburiguda panchayat in Andhra Pradesh.

The border areas have been in the grip of tension as the local residents of Andhra Pradesh have blocked the road bordering Odisha near Sambai for last five days.

The road blockade and protest came days after the Odisha officials removed an information board put up by their Andhra counterparts following a border demarcation a few days back.

It is worthwhile to mention here that this is not an isolated case. Andhra had earlier tried to gain control over some villages in Kotia panchayat under the same block in Koraput. The officials of the neighbouring State had made several attempts to lure Odisha villagers by distributing freebies and announcing welfare packages.

Some local residents alleged that the intrusion of Andhra continues unabated in bordering areas especially due to the Odisha government’s neglect and indifference to their issues.

Odisha had earlier inspected the border dispute in presence of Andhra officials several times, but the standoff has remained unresolved. The State has a long history of disputes with Andhra Pradesh which shares border with five districts — Koraput, Malkangiri, Rayagada, Gajapati and Ganjam.

Govt-Recognised Start-ups In Odisha Rise To 774