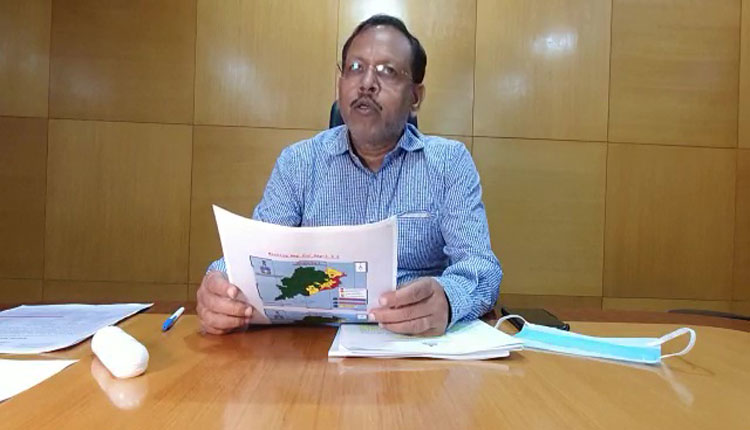 Bhubaneswar: Even as several districts of Odisha are expected to witness heavy to very heavy rainfall in the next few days under the impact of a likely deep depression over Bay of Bengal, there is no imminent flood threat, said Special Relief Commissioner (SRC), Pradeep Jena on Thursday.

According to Jena, yesterday’s well-marked low pressure area over west-central Bay of Bengal has concentrated into a Depression over northwest & adjoining West-central Bay of Bengal. The system is likely to intensify further into a Deep Depression during the next 24 hours. Moreover, it is very likely to move north-north-eastwards and cross West Bengal & adjoining Bangladesh coasts, as a Deep Depression between Sagar Islands (West Bengal) & Khepupara (Bangladesh) over Sundarbans by October 23 afternoon.

Under the influence of the deep depression, several coastal districts- Jagatsinghpur, Kendrapara, Bhadrak and Balasore will experience heavy to very heavy rainfall in the next 24 hours. A Red warning has been issued by the Met department for these districts (Till 0830 hours of October 23).

“Though there is possibility of waterlogging and localised flooding, we do not see a major flood threat to Odisha,” said Jena.

Jena further informed that the Water Resources Department and other officials are on alert and the weather development is being monitored round-the-clock.

“The river embankments are being reviewed and steps are being taken to ensure prompt action is taken in case of waterlogging and other issues,” Jena added.