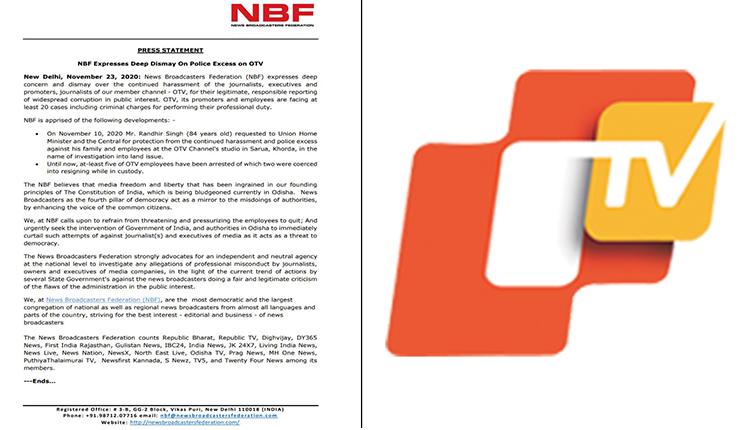 Bhubaneswar: The News Broadcasters Federation (NBF) on Monday expressed its deep concern and dismay over the continued harassment of executives, promoters and journalists of OTV by the Odisha government.

In a press statement released on Monday, the industry body comprising news broadcasters stated that OTV’s promoters and employees are facing at least 20 police cases including criminal charges for performing their professional duty and for their legitimate, responsible reporting of widespread corruption in public interest.

Until now, at-least five of OTV’s employees have been arrested of which two were coerced into resigning while in custody.

The NBF believed that media freedom and liberty that has been ingrained in the founding principles of The Constitution of India, is being bludgeoned currently in Odisha. “News Broadcasters as the fourth pillar of democracy act as a mirror to the misdoings of authorities, by enhancing the voice of the common citizens,” it stated.

The NBF further said, “We call upon to refrain from threatening and pressurizing the employees to quit; And urgently seek the intervention of Government of India, and authorities in Odisha to immediately curtail such attempts against journalist(s) and executives of media as it acts as a threat to democracy.”

In the light of the current trend of actions by several State Governments against the news broadcasters doing a fair and legitimate criticism of the flaws of the administration in the public interest, the NBF strongly advocated for an independent and neutral agency at the national level to investigate any allegations of professional misconduct by journalists, owners and executives of media companies.

Earlier in the day, the Indian Digital Media Association had condemned the concerted witch-hunt launched by Odisha government against the news channel.