Nayagarh: In a fresh twist to the case involving the brutal murder of a five-year-old girl from Nayagarh in July last year, the mother of the victim on Wednesday moved the Supreme Court seeking CBI investigation. Accepting the petition, the apex Court has sent notices to Odisha Government and the CBI.

Saudamini Sahoo, the mother of the victim filed a writ petition under Article 32 of the Constitution of India in exercise of her right to Constitutional remedies.

Sahoo has been opposing the investigation into the case launched by a Special Investigation Team (SIT) of the Odisha Crime Branch apprehending a shoddy probe on account of the alleged involvement of influential politicians belonging to ruling party in the crime.

She had earlier raised doubts over the veracity of the probe, especially when the sleuths overlooked her complaint in bringing the ‘main accused’ under the ambit of the investigation. She had identified Babuli Nayak, a close associate of Minister Arun Sahoo as the real accused behind the crime who, she said, was not properly investigated by the SIT.

She had repeatedly punched holes in the findings of the SIT and alleged that the probe team had falsely implicated a juvenile in the case while the real culprits were moving scot-free.

In a related development, the SIT met with a setback after the juvenile accused on Wednesday refused to undergo brain mapping test.

Earlier on Wednesday, the SIT produced him before the Juvenile Justice Board seeking permission to subject him to neuroscience techniques for ferreting out additional evidence from him.

Prior to this, the special POCSO court had rejected the SIT petition seeking a narco analysis test of the accused while terming him a minor.

The court had ruled that since it was proved that the accused was a minor, no narco analysis test could be conducted on him.

The accused’ counsel had produced the birth certificate and Matriculation certificate to prove that the accused had not attained the age of 18 years at the time the crime. The court had accepted the argument.

The SIT had conducted a bone ossification test on the accused to prove that he was a major. However, the court turned down the scientific evidence.

It is worth mentioning that on December 4, 2020, an exclusive report carried by odishatv.in with the headline ‘Odisha’s Missing Children: 13 Kidnapped Every Day, Crime Rate Highest In Country’had shed light on the enormity of kidnapping and missing children in Odisha. The report based on NCRB Crime In India Report -2019 had highlighted the poor tracing rate of missing children in Odisha, and at the same time it highlighted how the State has a crime rate (with respect to kidnapping)which was highest in country. 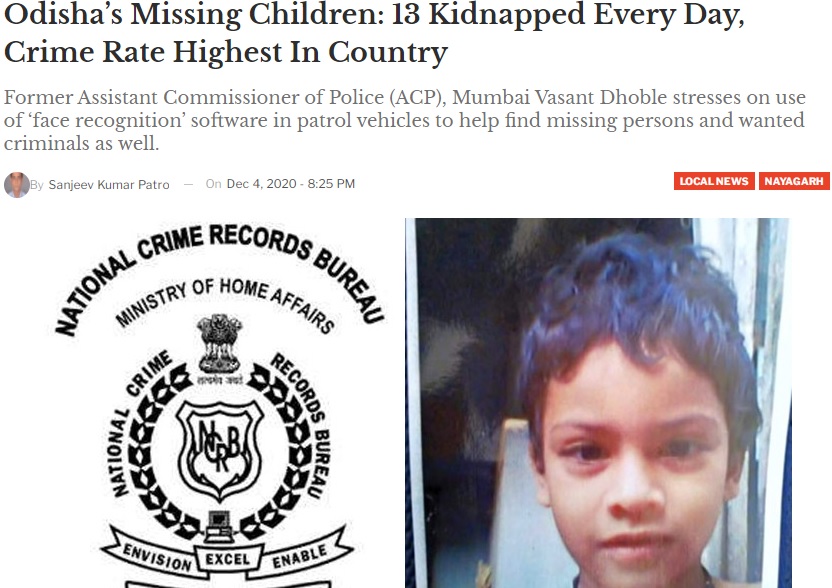 Significantly, in the petition filed before Supreme Court, Saudamini Sahoo, mother of 5-year old Nayagarh girl Pari who was kidnapped and murdered in July last year, had cited the odishatv.in report in the annexures of her petition.