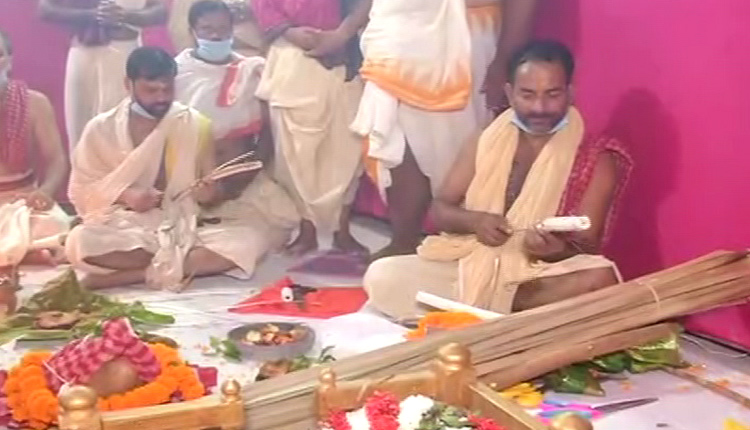 Puri: The ‘Besha Anukula’ ceremony that marks the beginning of the preparations for the rare ‘Nagarjuna Besha’ of Lord Jagannath and his sibling deities in Puri Srimandir was held today.

Besha silpis, the artisans in-charge of designing the special costumes of the Lords have begun the crafting of the attire after the initiation ceremony. Various types of raw materials like Santara Patta, thermocol and cane have already been procured for the designing exercise.

“This is the first time I am designing the attire for Nagarjuna Besha of the Lords. I was very young the last time the Besha was observed in 1993 and 1994 and therefore could not design the attire,” said servitor artisan Balaram Khuntia who has been assigned to design the ornaments and dresses for the deities.

The sevayats engaged in making the ornaments and dresses for the Besha of the deities will lead an austere life and consume only ‘Habisa Anna’ for the coming one month.

“The Besha Anukula ceremony for Nagarjuna Besha was performed by Balaram Khuntia on the occasion of Vijayadashami as per ‘Satwa lipi’ (Record of Rights of Puri Shree Jagannath Temple). The temple administration is in continuous touch with the servitors regarding the preparations for the attire rituals and the work will be completed as soon as possible,” informed SJTA administrator (ritual), Jitendra Sahoo.

The Nagarjuna Besha of the Lords was last observed in 1993 and 1994. This Besha is observed during Kartik month occasionally when the Panchuka (last five days of Kartika month) is observed as six days. This year, due to an extra month after Ashwin (Adhik Maas), the special besha of the Holy Trinity will be held on November 27, the extra day (sixth day) of Panchuka.

The deities will be dressed as Naga warriors, replete with golden weapons including arrows, bows, Hala (plough), helmet, Chakra (wheel) and Musala (mace).

Mythologists are of the view that the rare besha is celebrated to commemorate the killing of Sahashrarjuna by Parsuram, the warrior incarnation of Lord Vishnu. Though lakhs of devotees visit the Lord Jagannath Temple, this year as the temple is closed for devotees amid the prevailing Covid-19 situation, the ritual would be held without the participation of the devotees.