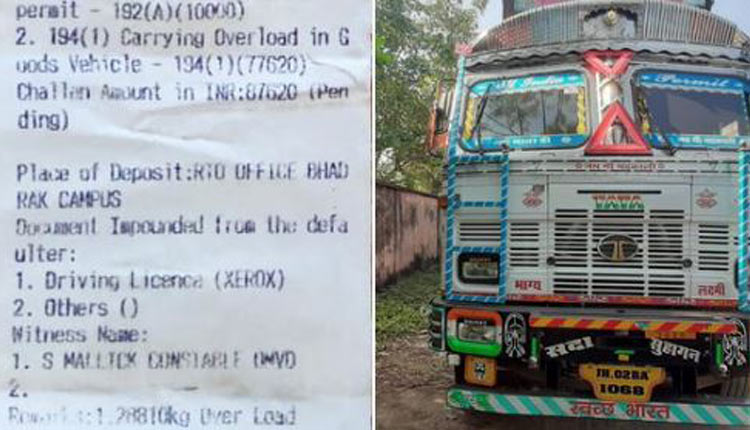 Bhadrak: The Regional Transport Office (RTO) of Bhadrak on Tuesday imposed a penalty of Rs 87,620 on a truck driver for allegedly violating the rules of amended Motor Vehicle Act.

While Rs 10,000 penalty has been imposed on the truck driver for running the vehicle without a valid permit, the remaining Rs 77,620 fine was imposed for carrying goods beyond the permitted limit.

According to sources, the truck carrying iron ore was heading to Visakhapatnam from Jharkhand when it was intercepted on National Highway 16 at Ranital Chhak in Bhadrak today morning.

The challan issued by the RTO authorities to the driver-cum-owner of the truck, Lakshmi Singh, a resident of Tajpur, Hazaribagh states that he was fined Rs 10,000 under section 192A of the Motor Vehicles Act for using vehicle without permit. Besides, he was fined Rs 77,620 for carrying overload in goods vehicle.

The challan further stated that 28810 kg of extra iron ore was loaded in the truck. The driver was directed to unload the loaded goods at his own risk before leaving the seized station.

It is worthwhile to mention here that hefty fines for violating the MV Act were enforced across the country from September 1, 2019.