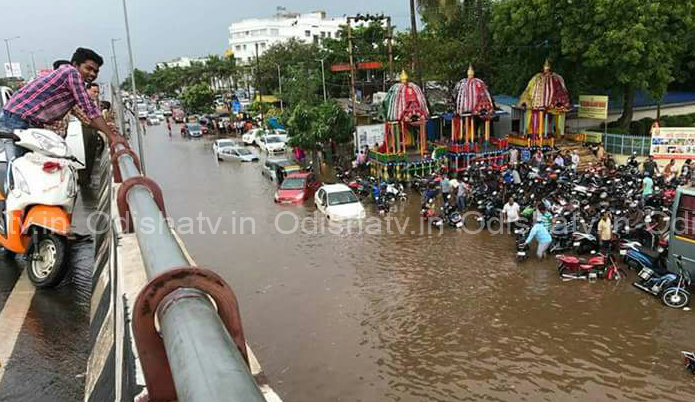 Bhubaneswar: Taking into consideration the demand of citizens for a clean Bhubaneswar, MP Aparajita Sarangi has shot a letter to CM Naveen Patnaik drawing his attention for the formulation of a comprehensive master plan to address the recurrent waterlogging and drainage problems in the smart city prevalent during the rainy season.

The Parliamentarian from Bhubaneswar mentioned that in course of her visits to different parts of the city, the general residents, civil society organisations and Resident Welfare Associations have been complaining about the severe inconvenience caused due to waterlogging and lack of adequate drainage system. In view of this, the MP said the government and the local administration needs to work on this on an urgent basis to alleviate distress which the residents of Bhubaneswar are subjected to year after year.

Reportedly during its recent visit to Odisha on January 17-18, 2020, the Parliamentary Standing Committee on Urban Development discussed key concerns with State officials and chalked out strategies to address the water-logging issues while highlighting the major drawbacks.

The Committee pointed out that in spite of recurrent water logging incidence in Bhubaneswar, a comprehensive Master Plan to combat the problem has not been prepared so far. A plan prepared by Meinhardt, Singapore in 2008, partly addresses the requirement but it lacks in terms of detailing and is inadequate as it does not factor in a lot of essential requirements including land acquisition costs. While the aforementioned Plan proposed construction of natural drains in two phases, the need for construction of all internal drains and making them part of the overall plan for effective discharge of stormwater has not been fully considered, the findings said.

Sarangi’s letter mentioned, “It has also come to the notice of the Parliamentary Standing Committee that construction of 13 (3 additional) natural drains will require land acquisition and freeing up Government land from encroachments. This has not been considered while preparing the Detailed Project Report in 2008.”

While Bhubaneswar Municipal Corporation (BMC) authorities have listed out 37 vulnerable points in the city which are prone to inundation, Rs 110 crore is reportedly being sanctioned by State Government to address the drainage issue.

However, a glance at the breakup of the proposed expenditure of Rs 110 crore reveals adhocism, stated the MP.

Highlighting this breakup point, the MP further said that taxpayers’ money will be dribbled away in the absence of a holistic approach.

Therefore, Sarangi has urged CM Naveen to issue appropriate instructions to the concerned authorities for gainful utilisation of Rs 110 crore and ensuring that drainage work is taken up keeping in view the requirements of 37 vulnerable points and not spending by just distributing it ward-wise. Also, a systematic and sustainable approach should be brought in towards desilting of drains and preparation of a comprehensive Master Plan by taking into consideration all the natural/internal drains and overall cost implication thereof, she opined while pledging complete support to the development.

TRT Centre In Rourkela, 45 MSME Clusters To Be Developed In Odisha : Union Minister