Monsoon Forecast 2021: Drought Spectre Looms Over Odisha As Rainfall Will Be Below Normal

Bhubaneswar: Even as the Indian Meteorological Department (IMD) has predicted a normal Monsoon for the country, the forecast brings a little cheer for Odisha. The State may witness its fifth…

Entertainment OTT October 2021 Month-end Specials: From Web Series to Movies, When and Where to Watch

Bhubaneswar: Even as the Indian Meteorological Department (IMD) has predicted a normal Monsoon for the country, the forecast brings a little cheer for Odisha. The State may witness its fifth drought year in the climate history of over the last two decades.

Since there is a forecast of below-normal rainfall in the State’s over 50 per cent of the districts during the Monsoon season this year, the year 2021, therefore, fully fits to be termed as drought year in the weather history of Odisha.

Even, if the IMD prediction is to be believed, the twin cities – Cuttack and Bhubaneswar – may record below normal rainfall in the coming southwest Monsoon this year.

A detailed glance at the forecast released today sheds light on the districts in the State that are predicted to record a below-normal rainfall this monsoon.

It seems western Odisha is going to record below normal rainfall this monsoon after historic deluge like conditions in 2019. The districts have witnessed a normal monsoon in 2020.

However, the 2021 forecast has been a damp squib as the districts of Sundargarh, Jharsuguda, Deogarh, Sambalpur, Balangir, Bargarh, Subarnapur and Nuapada have been predicted to receive below normal rainfall. 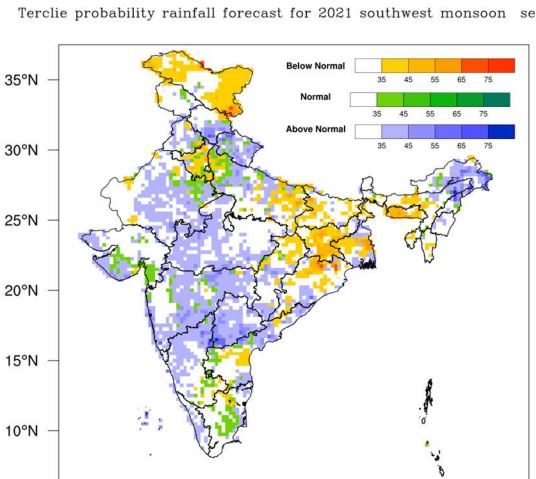 The IMD forecast has observed that there is a probability of over 35-45 per cent that these districts will be going to record a below-normal rainfall this Monsoon. (see the image above)

The assigned probability is put high at over 75 per cent for the districts adjoining Jharkhand – Mayurbhanj, Keonjhar and Sundargarh.

As per the forecast, except for the districts of Ganjam, Gajapati, Kandhamal and Nayagarh, the whole of the State is predicted to measure below normal rainfall this monsoon season.

However, a detailed glance reveals that western Odisha had recorded regular drought in all years since 2009, except for the years of 2013 and 2014.

Significantly, for the regular droughts in the region, the western region had then emerged as the epicentre of farmer suicides in Odisha. The State then had figured among the top-15 states for farmer suicides in the country during the period 2009 -2016.

WHY ODISHA WILL SEE DROUGHT?

As per the APEC and IMD ENSO report, the Indian Ocean Dipole (IOD), known as the Indian Nino, will remain neutral till July. The IOD conditions will turn negative thereafter.