Mo Sarkar, Where Are You? 9-Year-Old Odisha Boy Cries For Help 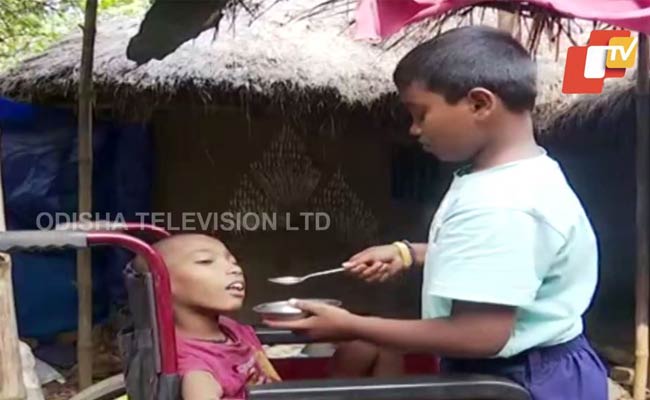 Kendrapara: He is a minor but his power with which he has been facing his responsibilities at this tender age seems to make him a superhuman. This is a story of Prathames Behara, a nine-year-old boy of Athabatia village under Marshaghai block which is sure to melt everyone’s hearts.

At a time when Prathames should have been spending time playing with his friends and studying in schools, family sufferings have made him realise the hard truth of life.

Responsibilities to take care of a bedridden father, divyang brother and a mother suffering from chronic arthritis have somehow snatched his childhood.

But Prathames neither seems bothered nor has given up on his hope for a silver lining in their lives. From cooking for the entire family to taking proper care of all the four members, he leaves no stone unturned to make them feel like there’s no one better to look after them.

“I want to study and get my father cured. I cook for the family and am taking care of all. I beg for my family and the day I don’t get anything, we sleep without having food,” Prathames narrated his family ordeal as tears trickled down his cheeks.

Struggling to contain his emotion as tears swelled in his eyes, Prathames’ father Pabitra Behera feels like a poor soul witnessing the struggle of his small boy.

“My elder son is taking care of us. He cooks food and then goes to school. I am unable to do anything,” said a helpless, Pabitra.

Though the sufferings have never let Prathames break down, the ‘Mo Sarkar’ initiative of Odisha government to help the people in need seems to have ‘disappointed’ him and his family.

When OTV took up the matter with the Kendrapara district collector Samarth Verma, he said that the administration will extend all types of help to the family of Prathames.

“The BDO along with other office staff will visit the village and inquire into the matter. We will ensure that the boy’s family gets all types of help,” said Verma.