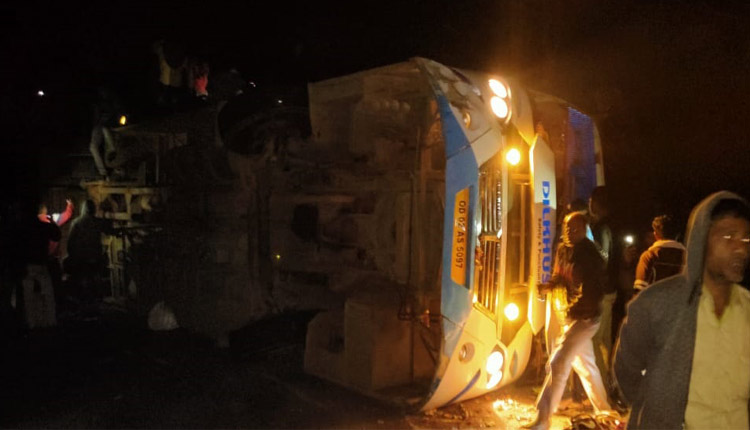 Kalahandi: As many as two persons were critically injured while several others sustained minor injuries as the bus they were travelling in overturned at Amapani ghat in Kalahandi district.

The private bus carrying around 40 passengers was reportedly en-route to Malkangiri from Bhubaneswar when it met with the accident critically injuring a passenger and the helper of the vehicle.

Till last report came in, rescue operation was underway by police and fire services personnel.

In another road mishap in Odisha on Wednesday, at least two persons including a woman labourer were killed after a cotton-laden tractor overturned near Trikalapadu area late last night.

Speaking about bus accidents in Odisha, over 100 people have so far injured in several such mishaps since December 2020.

At least 25 passengers were injured after a private bus overturned near Hatibari under Rairangpur rural police limits on December 10.

Similarly, 40 people were injured after the bus they were travelling in overturned at Badakenduguda near Koksara here in Kalahandi district on December 13.

On December 17, more than 25 passengers sustained injuries when the bus they were travelling in overturned while crossing Gadiapada ghat near Phulbani in Kandhamal district.

One December 27, a minibus overturned near Balu Ghat in Rourkela killing at least two persons and injuring 20 other passengers.