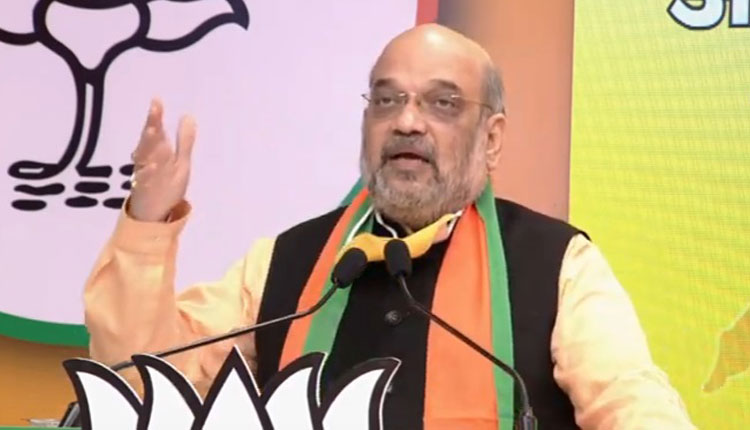 Bhubaneswar: Union Home Minister Amit Shah on Monday expressed his gratitude to the people of Odisha for reposing their faith in the BJP during the general polls and said that the Modi government is committed towards the development of the State.

Addressing people of Odisha during the party’s virtual rally, Shah highlighted the achievements of the Narendra Modi government in its first year of the second term and steps taken by the Centre to deal with the COVID-19 pandemic.

Shah gave a detailed account of the Central assistance to the State in the first year of the second term and hailed party’s schemes like Ayushman Bharat, Swachh Bharat, Ujjwala, Pradhan Mantri Jan Dhan Yojana and PM-KISAN initiated for the welfare of the poor.

To make #Odisha a developed state is our commitment & promise & PM Modi is working for the fulfilment of the same: Amit Shah at #BJP #Odisha Jan Samvad virtual rally pic.twitter.com/n80CEP3pdR

Taking a jibe at Rahul Gandhi, Shah said Congress in 10 years of rule once waived off loans amounting to Rs 60,000 crore of 3.5 crore farmers, but there is no record to prove it. However, BJP has so far extended assistance of Rs 72000 crore to 9.5 crore farmers. Besides, Rs 6000 will be directly credited to the bank accounts of farmers every year under PM-KISAN scheme.

Speaking during the virtual rally, Union Minister Dharmendra Pradhan said that Modi government has always been prompt in responding to the developmental needs of Odisha while Congress had always meted out a step-motherly behaviour to the State.

He further said that in 2005, when he along with other MPs approached former Prime Minister Manmohan Singh for financial assistance for Odisha, Singh said that money doesn’t grow in tress and his remarks humiliated Odias. However, PM Modi released Rs 500cr assistance to the state within 24 hours of cyclone Amphan.