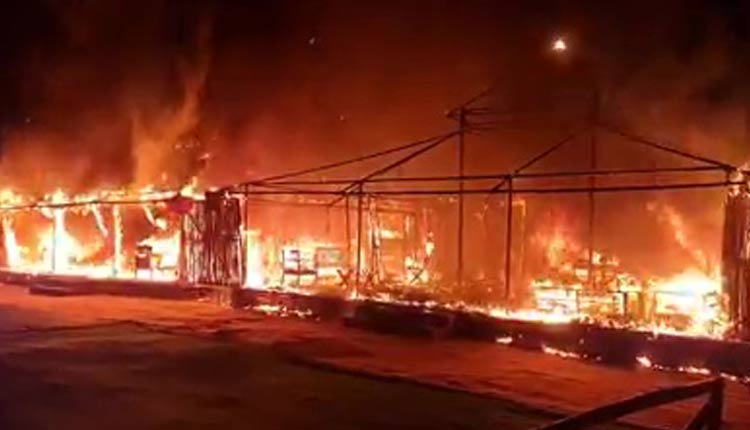 Cuttack: At least three cottages set up at Satkosia eco retreat festival near Baliput in Cuttack district reduced to ashes after a major fire broke out at the site in the early hours of Sunday.

The visitors to the festival had a narrow escape in the mishap. While the exact cause of the blaze is yet to be ascertained, it is suspected that the fire was triggered by an electric short circuit.

Transport commissioner Sanjeeb Panda and his wife Santosh Bala (Home department special secretary), who were in one of the tents at the Eco-Retreat Site when the fire started, escaped the fire mishap by a whisker. Panda through a tweet informed that the fire started at 5 am and added that he and his wife are safe.

“By the grace of God, me and Santosh escaped without any injury as fire broke out in our tent at Satkosia Eco Retreat at about 5 am on 28.2.2021 due to electrical short circuit. Three tents were burnt and there was no injury to any one,” Panda wrote.

By the grace of God, me and Santosh escaped without any injury as fire broke out in our tent at Satkosia Eco Retreat at about 5 am on 28.2.2021 due to electrical short circuit. Three tents were burnt and there was no injury to any one. pic.twitter.com/EvJbQJHGjq

On being informed, fire services personnel and police rushed to the spot and doused the flame. However, the three cottages were completed gutted by the time.

Meanwhile, the Odisha tourism department confirmed that there was no injury or loss of life and an inquiry into the matter is being conducted.

Safety of the tourists is paramount and all steps will be taken to ensure that no recurrence of such an incident happens in future.

It is pertinent to mention here that the Odisha Tourism Department introduced the Eco Retreat Festival at Baliputa on December 9 last year in order to revive the Covid-19 hit tourism sector.

The three-month-long festival was inaugurated by Union Tourism Minister Prahlad Singh Patel via video conferencing. Apart from Satkosia, the festival was also organised at Ramchandi beach in Konark, Bhitarkanika, Daringibadi and Hirakud.