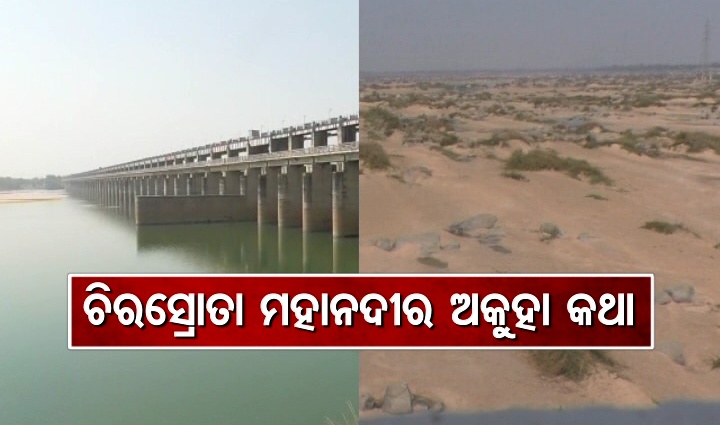 Bhubaneswar: Be it the construction of barrages over Mahanadi by Chhattisgarh government or negligence and the lack of vision by Odisha government, the direct effect of a dry riverbed during the non-monsoon season has threatened livelihood of lakhs of people in 15 districts of Odisha.

Two pictures of Mahanadi, one at Kalma in Chhattisgarh and the other one at Sukhasodha in Jharsuguda depict the real story of one of the longest rivers of Eastern India over which both Chhattisgarh and Odisha have locked horns over sharing of its water.

The same kind of bleak pictures emerged from Sonepur and Hirakud as well where the water level of Mahanadi is going down at a steeper rate each passing day.

Priyaranjan Babu, a local resident of Sambalpur said, “If the water level at Hirakud is not maintained then we will face severe water scarcity in the near future. The government should take immediate steps to address this issue.”

The Secretary of Hirakud oustees front, Gopinath Majhi said, “Because of the Kalma Barrage at Chhattisgarh where the natural flow of Mahanadi has been disrupted, the downstream water at Jharsuguda and Sambalpur has reduced drastically.”

However, Odisha government’s admittance of the reduced water level and impending water scarcity in summer has raised many concerns about its intent.

On February 25, 2021, answering a question in Odisha Assembly by BJP’s Mohan Majhi, Odisha Water Resources Minister Raghunandan Das said, “The water level of Mahanadi will reduce further in the coming years. However, out of the 15 water conservation proposals sent to the Central Water Commission (CWC), seven draft proposals have been returned back to us.”

“So out of the 23 proposed in-stream storage structures, we have decided to fast track 13 important projects on an urgent basis,” said Das.

Adding salt to the wound, Sudarsan Das, Congress leader and Convenor of Save Mahanadi Movement said, “These tribunals take a lot of time to reach a decision. Cauvery water dispute is a glaring example of how these panels resolve the disputes at a turtle’s pace. So the government should take alternative steps to address the issue.”